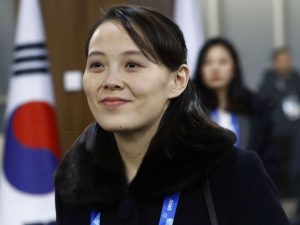 A few months before the opening of the Winter Olympics in South Korea, the “Little Rocket Man”, North Korean dictator Kim Jong Un, decided to send athletes, cheerleaders and his sister to the Olympics. The success of his propaganda efforts must cause his fat checks to get rosy red with glee and elicit a smile far wider than that pasted, perpetual one on his sister’s face.

Irrespective of how many medals Kim Jong’s athletes may win, he and his murderous, Marxists, cohorts have won the gold medal for propaganda. This was achieved by the duo team of Kim Young Un’s sister, with her “Mona Lisa smile,” and the socialist-leaning, Trump-hating, leftists news media’s gushing in their reporting of her presence in the V.I.P. box and in other places.

CNN tweeted: “Kim Jong-un’s sister is stealing the show at the winter Olympics.”

Mike Huckabee said, “Our media are going gaga over Kim Jong-Un’s sister as if she’s the Kardashian of Korea and seem totally smitten with the team of pretty cheerleaders that Kim sent. In fact, it’s hard to tell who’s doing the most cheerleading for North Korea: its own cheerleaders or our media.”

The Washington Post, and ABC have raved that Kim Jong-Un’s sister (Kim Yo-jong is her name), and a group of North Korean cheerleaders, have “stolen the show” and grabbed “the spotlight.” NBC squealed that North Korea’s cheer squad (the “army of beauties,” as The New York Times referred to them) has been “so satisfying to watch.” Reuters claimed that North Korea has “won the gold” for “diplomacy” at the games. The Times, infatuated with Yo-jong’s smile, said that the U.S. has been “outflanked in diplomacy” by the communist regime.

Michael Moore proclaimed his “love” for the “F Trump” attitude displayed by the North Korean contingent. Yo-jong was dubbed “the Ivanka Trump of North Korea,” and many regular Twitter users reacted with glee when they noted the “side eye” and “shade” she threw at Mike Pence during the opening ceremony. A beaming Think Progress summed it up this way: “North Korea’s charm offensive is working.”

There is no doubt that these reporters are “Never-Trumpers” and hate him and his administration with unprecedented fury, but to actually celebrate the overt propaganda tactics of the most brutally oppressive regime on Earth while denigrating the presence of our own Vice President is totally incredulous.

In commenting on his radio program about the cheerleaders for North Korea, Rush Limbaugh said, “Hatred poisons the beholder and blinds these people to truth and reality all around them. It’s embarrassing.  I mean, of all the countries in the world to sidle up to and to promote?  But it’s who they are.  This is the teachable moment about it, I think, and for all of their acolytes who join them in this. “Oh, yeah! Oh, yeah! Kim Jong-Un’s sister is much preferable to Mike Pence and Donald Trump. Absolutely! She’s a far more decent human being, far better, far more refined and…”  It’s just mind-boggling to watch these people go on and on and on about it.”

“I wonder if these “journalists” ever ponder the similarity to the “Happy Corps,” a team of women (some of whom are reportedly kidnapped from their families at gunpoint by the military) who “entertain” Kim and are forced to act as concubines to him and other top male officials? Kudos to the media outlets who actually recalled the 2006 North Korean cheerleaders who were sent to a prison camp for talking about what they saw in South Korea. NBC went so far overboard in its idol worship for Boy Leader’s cheerleaders, they even tried to delete one of their tweets, but the Internet is forever” (Mike Huckabee).

The cheer leading, leftist press, who are singing the praises of the little smiling sister and North Korea are willfully overlooking the irrefutable facts that North Korea is one huge concentration camp where hundreds of thousands of innocent men, women, and children are imprisoned and enslaved in hellholes. They are beaten, stoned to death, starved, raped, tortured, and mauled by dogs. Sometimes they are forced to kill each other for the amusement of the guards. Prisoners eat rats and insects in order to stay alive. Pregnant women are forced to kill their own babies. About a quarter of the prison population dies every year, either from disease and starvation or execution.

While Kim Jong-Un grows ever fatter, his people are starving. Over 70% of the North Korean population is undernourished or dying of starvation.

North Korea is the world’s worst oppressor of religious minorities. About a quarter of a million Christians have gone missing in North Korea over the years, and currently there are around 50,000 languishing in prison camps. The small community of believers in the country are forced to meet and worship in secret. If they are discovered, they face not only political imprisonment but summary execution, enslavement, torture, and rape. In some cases, Christians have been tossed off bridges, trampled, crushed by steamrollers, and crucified.

He goes on to write, “North Korean citizens believe their government discovered unicorns and invented the hamburger. They think the seasons and the stars changed when Kim Jong-Il was born. They also believe Kim Jong-Il never used the bathroom, made 11 holes-in-one during one round of golf, and was considered a fashion icon across the globe, among other things. We tend to laugh about this kind of stuff, but there’s nothing funny about it. These people have been kept in both a literal and figurative dark, all information and knowledge from the outside world cut off, and through this ignorance and fear an entire nation has been brainwashed. It’s horrific. All of this is horrific.

“But, hey, at least Kim Jong-Un’s sister has a nice smile.”

Expect brother and sister Jong-Un to keep smiling until they get the nuclear warheads to fit on the heads of their intercontinental ballistic missiles — THEN?