Check Out How Much Cash The Obama’s Raking In Post-Presidency. It’s Crazy. 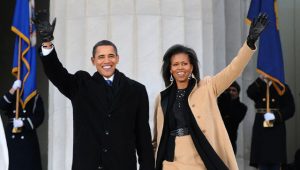 If you don’t think being the president is a lucrative deal that leaves you set financially for life, you aren’t paying attention.

The current salary for the president is set at $400,000 a year, but once you do your time in the Oval Office, you are going to make a whole lot more, and the Obamas are proof of that.

Yes, former President Barack Obama and his wife Michelle are absolutely making a killing with the amount of bread they’re bringing in. Check it out.

According to insiders, the Obamas are cashing in on the presidency in a way that may be outpacing even the Clintons. Along with speaking fees of around $400,000 a gig, the Obamas just reportedly nailed down a massive contract with Netflix to go along with their even larger book contract.

In its report on how the Obamas were able to secure their big deal with Netflix — through a former campaign donation bundler to whom Obama gave the US ambassadorship in the Bahamas from 2009 to 2011 — the New York Post highlights some of the eye-popping numbers.

The Netflix deal, an entertainment industry insider told the Post, could be valued at $50 million. How much of that money will end up directly in the pockets of the Obamas is unclear, but the company the couple formed to broker the deal, Higher Ground Productions LLC, will surely not have a cash flow problem anytime soon.

And the huge Netflix contract isn’t the biggest deal the Obamas have landed: They’ve also reportedly signed a joint book deal with Penguin Random House valued at over $65 million. Michelle’s memoir, the first book planned in the series, is supposed to be released in November.

This, folks, is part of the problem with the modern day concept of the presidency. It has strayed far from the intent of the original founders, who wanted this office and every other to be about public service, a sacrificial kind of thing that didn’t provide much in the way of a lucrative future.

Because those who volunteered to run for office, knowing they wouldn’t make any money from it or be able to build a career out of it are usually upright in character, folks who won’t compromise their values and will uphold the law.

Unfortunately, we now have people in office for their entire lifetime, essentially making them welfare recipients mooching off the public’s dime. These individuals only care about furthering their own careers.

And if you really want to go for the big bucks, then just become an ex-president.

Makes you long for the days of George Washington, doesn’t it?