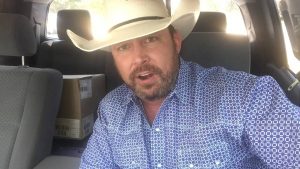 A couple of years ago someone sent me a message after watching one of my social media videos and said, “We hear your accent and know that you’re from the south, which means we also know that you are ignorant. Nothing came from the south but inbreeding and racism. Why should we listen to an ignorant man from the south?”

I wish that I could tell you that as the popularity of my videos grew those types of messages abated, but they haven’t.  If anything they have gotten worse. I’ve often quipped that I wish people could spend a day in my “in-box” reading what people say to me. It might just cause you to lose the last vestige of faith you have in humanity. I’m certainly thankful that my mother can’t see it.

After I received that message I pulled over in my truck and felt prompted to respond with yet another video defending southern heritage. I titled it simply, Unapologetically Southern (see below). And I am. I have no reason to apologize for the south that I grew up in. Sure it has its scars from the sins of generations past, but my generation did not live those realities. At least not in my finite and limited experience.

Yes if you Google my name you’ll find on Wikipedia that I was born in New Jersey. Many have used that as cannon fodder to accuse me of not being southern. I was born there because that’s where my mother happened to be when she went into labor. It sorta works that way.

I assure you however that from the age of four months on I was a Georgia boy that did what all good Georgia boys do. I grew up fearing God and my daddy and knew well the belt end of discipline. I said “yes ma’am” to my momma and grand momma and learned early to open doors for ladies. When we happened to “go to town” where we lived in Augusta, GA I was always excited to sit at the Woolworth’s lunch counter and eat a greasy hamburger while my feet dangled from the stool. If I got all my “chores” done my parents would let me spend the weekends with my maternal grandparents (Maw Maw and Paw Paw) which was the highlight of most my weeks. At their house I could work in Paw Paw’s wood shop, shoot squirrels to eat for breakfast (still a fan of the squirrel shootin’ while maybe not so much the squirrel eatin’), listen to the Grand Old Opry on staticky AM radio, check out books from the library, and go to Sunday School with Maw Maw.

My life growing up in the south was filled with experience and color. I was exposed to people from all walks of life and backgrounds. I would always sit and listen to the adults tell their stories after dinner and laugh. Very few people can tell stories better than a true southerner with the inherent dialect, slang, and colloquialisms. To this day I’m thankful for the stories I heard. It made me the storyteller I am.

Growing up in the south the idea of racism was never readily on my mind. I didn’t hear about it so I didn’t know about it. Some today would say that’s because of my “white privilege,” but I don’t know how much of that we had. I was privileged in other ways.

Maw Maw worked for the Richmond County Board of Education in the records department for 40 years in the same office as her friend and colleague Earnestine. I spent many after school hours in that office listening to them work and gossip. I never thought of Earnestine as black, but as the woman that smelled good and gave great hugs. She was family to me and I never thought any different. I guess I was privileged to know and love her.

My grandfather’s masonry company had exactly three employees: Him, Ralph, and Red. I still remember Ralph sitting in the backyard with me explaining his philosophies on life while he smoked a Lucky Strike cigarette, and I felt privileged to hear him pontificate.

Each day after work Maw Maw had food she had cooked placed in pie tins wrapped in aluminum foil for Red to take home to his family. She’d find us in the backyard with him teaching me how to box and throw an effective right cross. I felt privileged that he would take the time to play with an annoying kid after a long, hard day’s work.

Ralph drove he and Red home each evening in my grandfather’s truck, which they promptly returned in the following morning ready for a new work day. They’d walk into the house and sit at the breakfast table eating biscuits, eggs, and bacon while drinking coffee. I felt like “one of the men” as I’d sit between them. To me it was a place of privilege just to be at the same table.

As I got older I got more serious about playing baseball and felt there was some future in it for me. Each season became more intense and more competitive. Long hours were spent on school buses headed to out of town games against cross-state rivals which ended in cramped hotel rooms – four teenage boys in one room with two beds – you do the math. We gave exactly ZERO thoughts to the skin color of who we shared rooms or beds with. We felt privileged however to have great teammates and friends.

When the time to go off to college came I chose the the University of Georgia and the University of Georgia chose my buddy Jock, offering him a full scholarship to play football (with a name like Jock he had to be good, right?). So Jock and I would load up in my Pontiac Grand Am and make the drive to Athens, GA for school. I think we both felt a little privilege to be called Georgia Bulldogs. Oh yeah…Jock is black. I forgot to mention it because it really doesn’t matter to me. I’m privileged to say that he’s still my friend to this day!

Things have changed a lot for me since those early days as a boy in Georgia but not much has changed in my attitude. I’m still thankful for the privileges I’ve had in my life. I’m a truly blessed man. I never knew I’d get to live out my dreams of entertaining people around the country with my stories. I have some men in my life that make it possible – there’s my Jewish manager, my gay, Mexican agent, and my African-American IT specialist – and I feel privileged to work with them every day. Not bad for an ignorant, narrow-minded southerner.

That’s a piece of my privileged life. Those were the people in it. Growing up we loved and respected one another like family. There was no talk of racism or hate. That’s not to say it didn’t exist as I’m more than assured it did, just as it does today, and likely always will. I hate that it exists and hate that realities like slavery in this country ever occurred. I wish I could apologize for it and it make a difference.

There was racism when and where I grew up. However, it did not define our relationships as it seems to today. Evil, even though it exists, doesn’t always have to be acknowledged. I grew up in a different south and it’s a heritage that I’m quite proud to claim and own. And for that I don’t apologize.