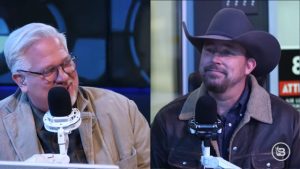 Comedian and gubernatorial candidate Chad Prather sat down with conservative powerhouse Glenn Beck for an interview where the pair had a chat about why the state of Texas is so critical to the fate of our republic as a whole.

And folks, it most certainly is. The question being asked is what will happen to the United States as a nation if the state of Texas were to fall to progressives, much the way Canada has now been completely taken over by totalitarians, all in the name of “public safety?”

One of the points Prather brings up about the current administration in Texas might be a real shocker to a lot of the state’s residents and individuals around the country, but the current governor actually sent a letter to the Chinese Communist Party, congratulating them on ruling — or more accurately, oppressing — the people of China for seventeen years.

The conservative comedian-turned-Republican candidate also noted that allowing some of the big tech companies, the vast majority of which are super liberal, to come into the state may not be as much of a positive as folks tend to think.

In fact, since these companies are bringing their ideologies into the state with them, and many workers might follow suit, you could end up seeing Democratic Party power swell in the Lone Star State. Things like vaccine mandates might gain more popularity.

And, of course, the fact folks are fleeing from California into Texas, also bringing their liberal politics with them, could mean we see the state fall to the left.

And that is bad, bad news.