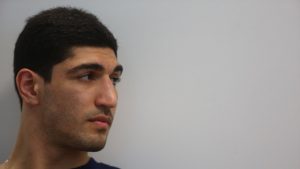 21 May 2015. Istanbul, Turkey. Enes Kanter is a Turkish professional basketball player for the Oklahoma City Thunder of the National Basketball Association.

So the 2021-2022 regular season for the Boston Celtics kicked off in Madison Square Garden on Wednesday in a game against the New York Knicks.

It was a pretty awesome game, with Marcus Smart of the Celtics managing to hit a pretty saucy three-point shot right as regulation game time expired, just before the Knicks managed to pull of a victory, 138-134 in double overtime.

However, this game could be the last Celtics game that will be allowed in China for a very long time, thanks to team center Enes Kanter.

Kanter posted up a video on his Twitter account Wednesday where he called on the communist government of China to “free Tibet.”

“My message to the Chinese government is free Tibet,” Kanter wrote in the post. “Tibet belongs to Tibetans. I am here to add my voice and speak out against what is happening in Tibet under the Chinese government’s brutal rule, Tibetans people’s basic rights and freedoms are non existent.”

“I say, shame on the Chinese government,” Kanter said. “The Chinese dictatorship is erasing Tibetan identity and culture. The cultural genocide in Tibet is so stifling, that more than 150 Tibetan people have burned themselves alive, hoping that such a horrific act of sacrifice will raise awareness and attention towards the ongoing abuses within Tibet.”

The nation of China took control of Tibet way back in 1951.

The reaction in communist China was swift, with Chinese streaming service Tencent — which has partnered with the NBA — cutting the live feed of the Celtics vs Knicks game. On Thursday, future Celtics games were marked as unavailable to be live-streamed, according to The New York Times.

In 2019, the NBA ran afoul of the Chinese government when Daryl Morey — then the general manager of the Houston Rockets — voiced his support for pro-democracy protesters in Hong Kong.

Morey’s message instantly ignited outrage from China’s communist government, which moved to end its relationship with the Rockets. The NBA quickly went into damage control mode, saying that the “views expressed by Houston Rockets General Manager Daryl Morey have deeply offended many of our friends and fans in China, which is regrettable.”

“I don’t want to get into a … feud with Daryl Morey, but I believe he wasn’t educated on the situation at hand and he spoke,” James went on to say. “So many people could have been harmed, not only financially, but physically, emotionally, and spiritually,” the NBA superstar added. “So, just be careful what we tweet and say and what we do even though, yes, we do have freedom of speech there can be a lot of negatives that comes with that too.”

Kanter, who is originally from the country of Turkey, has been very critical of Turkish President Recep Tayyip Erdogan over the course of the last few years. So much so, in fact, that the country has issued nine warrants for his arrest including ones for defamation and terrorism.