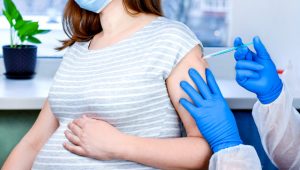 The Centers for Disease Control and Prevention have now issued a brand new recommendation that says pregnant women should go ahead and receive the COVID vaccine, despite previously only stating they were “eligible” to be vaccinated.

New research findings convinced the CDC to update their recommendation after discovering there was no increased risk of miscarriage for women who were still in the early phases of their pregnancy. For those who are already late into their pregnancy, the CDC stated they have not found any safety concerns for women or their unborn babies.

“In a new analysis of current data from the v-safe pregnancy registry, scientists did not find an increased risk for miscarriage among people who received an mRNA COVID-19 vaccine before 20 weeks of pregnancy. This adds to the growing evidence of the safety of these vaccines,” the CDC said.

According to CDC data, only about 23% of pregnant women have been vaccinated.

Research from both the CDC and the Journal of the American Medical Associationfound a higher risk of severe illness for pregnant women who contracted COVID-19.

“Taken together, the time was right to come out with a stronger recommendation to hopefully increase the vaccination rates in pregnant women and hopefully protect them against Covid-19,” Sascha Ellington, the head of the emergency preparedness and response team in the CDC’s Division of Reproductive Health, said during a conversation with the Washington Post.

Again, the only thing the vast majority of Americans want right now is the choice to decide for themselves whether or not to get the vaccine. It’s the mandates that are messed up. If someone wants to take the risk after being educated on the data, well, that’s up to that individual.

On the flip side to that, I think any recommendation that comes out of the CDC should be taken with a rather large grain of salt, given their previous track record during this pandemic.