CORRECTION: CDC Director Gets Pummeled After Stating 3/4 Of COVID Deaths In Vaccinated People Only Were The Result Of Multiple Comorbidities 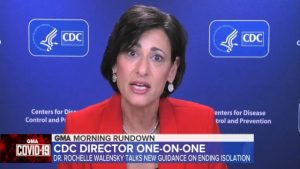 CORRECTION: The original version of this piece falsely stated that 3/4 of total COVID deaths had occurred in people with several comorbidities. This was inaccurate information. The comment made by Rochelle Walensky, which was taken out of context, stated that 75 percent of the deaths among fully vaccinated people was due to individuals having at least four comorbidities, not all COVID deaths.

A fact check by Health Feedback states that the confusion ” may have been due to editing of the original interview that was broadcast by Good Morning America. An updated version of the interview was published on their YouTube channel on 10 January with a note saying: ‘This video clip has been updated to include an extended version of a [Good Morning America] interview with [CDC] Director Rochelle Walensky. A shorter version edited for time was broadcast on Friday, January 7.’

Centers for Disease Control and Prevention Director Rochelle Walensky is catching a whole lot of flack after she stated in an interview last week — which is conveniently being ignored by the mainstream media — that the vast majority of Americans who died due to the coronavirus actually had at least four other comorbidities.

Walensky’s confession happened during an interview on the “Good Morning America” program on ABC.

“The overwhelming number of deaths, over 75 percent, occurred in people who had at least four comorbidities,” Walensky said during the conversation she had on the program last week. “So really, these are people who were unwell to begin with.”

“Walensky’s remarks came in response to criticism from the American Medical Association and others over the CDC’s reduced self-quarantine guidelines, taking it down to five days followed by five days of wearing a mask, as opposed to the previous standard of quarantining seven to 10 days,” Conservative Brief reported.

“Others saw the frank admission by Walensky as the Biden administration shifting gears on messaging as the latest variant of the virus, omicron spreads like wildfire throughout the country — after the president criticized his predecessor, Donald Trump, repeatedly during his 2020 campaign and vowed to ‘shut down the virus’ not the country,” the report continued.

He also pledged not to implement a vaccine mandate but did so anyway, though the U.S. Supreme Court struck down the mandate for private businesses last week.

“The CDC director just said over 75% of ‘covid deaths’ occurred in people with at least four comorbidities. Since Biden can’t shut down covid, suddenly all this data is getting shared publicly,” Outkick’s Clay Travis said in a tweet that featured a video clip of Walensky making her comments.

The CDC director just said over 75% of “covid deaths” occurred in people with at least four comorbidities. Since Biden can’t shut down covid, suddenly all this data is getting shared publicly. pic.twitter.com/NKvproy3lx

Others see the admission as a means of getting ahead of virus messaging before the 2022 midterm elections, which polling suggests could be politically disastrous for Democrats amid cratering approval ratings for Biden himself as well as Vice President Kamala Harris.

“…[C]ase numbers have only gotten worse, and the left has realized they are losing the perception battle on COVID-19. It is apparent in many metrics, from Biden’s poll numbers to packed event venues across the country,” Grant Atkinson wrote in a piece that was published by The Western Journal last week.

“Americans are no longer willing to wait for a far-off dream of a world where COVID-19 is completely eradicated. They are ready to live their lives and acknowledge that COVID-19 is just a threat they will have to live with,” he said.

“For the vast majority of Americans, the threat is rather minimal compared to the worst-case scenarios pushed by the fear-mongering left when the pandemic began,” he continued.

Atkinson concluded his piece by writing, “Walensky’s admission is not motivated by any sort of new data or findings, because this data has been apparent for months on end. Instead, it is a purely political move to try and gain some support on an issue where the Democrats are quickly losing ground.”

CNN reported that conservative folks were twisting what Walensky actually said, saying, “Walensky did not say that more than 75% of the people who have died of Covid-19 had four or more comorbidities. “Good Morning America” edited out some of Walensky’s comments; the viral 11-second clip was further shortened from the edited footage. The full footage, which Good Morning America released hours after the controversy erupted on Monday, proves that Walensky was speaking specifically about a small number of deaths that were described in a new federal study. That study found that, of a group of 1.2 million people who were fully vaccinated between December 2020 and October 2021, 36 of them had a death associated with Covid-19 — and that, of these 36 people, 28 of them, or about 78%, had at least four of eight “risk factors” for experiencing a severe outcome from the virus, such as an age of over 65, diabetes and a variety of additional chronic diseases.”

“The risk of severe COVID-19 increases as the number of underlying medical conditions increases in a person,” the health agency went on to add.