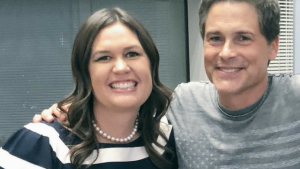 You know your country has got to be doing pretty well if an actor taking a picture with the President’s Press Secretary is the most upsetting thing about your day.

Sarah Huckabee Sanders is vehemently hated by the left for…well, we’re not really sure if they know why, actually, but as with any conservative woman they’re definitely not thrilled about her severe violation of identity politics for being a woman who is not a liberal.

So, you can imagine the explosion in the Twitterverse when she posted a picture of Rob Lowe, who, despite having been an open conservative for ages, also grievously sinned against the identity politic gods by being pictured with the Most Hated Woman in America.

Here’s the Tweet heard ’round the world (and by “world”, I mean the tiny bubble Twitter leftists live in, in which everything revolves around them and they live in a terrifying Republican dystopia in which theirs are the only voices of liberation and hope, speaking out when necessary even against well-loved Hollywood actors who don’t think exactly like them in their private lives):

So fun meeting @RobLowe. Incredibly talented, funny, and very nice guy. Thanks for entertaining us all these years! pic.twitter.com/9WAd2ICeWE

Heartbroken fans (who apparently knew nothing of Lowe’s opinions before this severely insignificant incident, were quick to call for…I’m not even kidding…BOYCOTTS of Rob Lowe.

Boycotts. Of an actor. For taking a picture with a member of the Presidential administration. All of this, of course, begs, nay, screams the question…don’t these people have anything better to be upset about?!

@RobLowe BOYCOTT HIS SHOW IT STINKS ANYWAY HE FLIES WITH LIARS https://t.co/RF6Ha19APL

As the Conservative Tribune’s Cilian Zeal aptly points out, we’ve learned little about Rob Lowe from this experience…but a lot about the current state of the left.

“Keep in mind that Lowe — a rara avis in that he’s a conservative entertainer — didn’t say anything about Sanders. He didn’t say anything that would offend anyone. He didn’t say anything, period. He simply posed for a photo with her. I suppose Lowe had to know this would trigger liberals and did it anyway, but this says more about the state of America in 2018 — as well as Lowe’s steadfast decision to disregard what the media or the Greek chorus of liberal social media copycats might think — than it does about his decision to take a picture with a Trump administration figure,” he writes.

“Rob Lowe is the kind of guy who opens up his house to feed firefighters that were battling the largest blaze in Southern California in recent memory, all on his own dime,” he adds. “He takes one photograph with the White House press secretary and all of a sudden, that goes away? Some people want to boycott him not even over what he thinks or says, but who he takes a picture with?”

These people are basically looking for any excuse to complain at this point. They can’t get over 2016 and they’re more content to tear their hair out than they are to just suck it up and move on with their lives.