Candace Owens Destroys BLM Founder: If ‘White People Are So Bad, Why Doesn’t She Want To Live Amongst Black People?’ 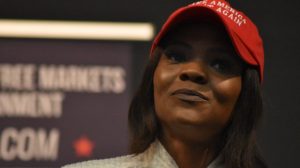 Daily Wire host Candace Owens completely obliterated BLM co-founder Patrisse Khan-Cullors over her hypocrisy of hating on white people and calling them her “oppressors” and then buying a pricey home in a predominantly white neighborhood.

Owens spoke with Tucker Carlson of Fox News saying that BLM managed to raise $25 million dollars which was supposed to be for the purpose of “building a black movement.”

“Apparently, the ‘black movement’ was Patrice moving herself, a black woman, into other areas of the communities of people that she claims are oppressing black Americans,” Owens said, making fun of Khan-Cullors.

“Why doesn’t she want to live amongst black people?” she went on to ask. “Why is she choosing to move herself into an all-white neighborhood? These are important questions.”

According to a report from The New York Post, Khan-Cullors is reportedly on a “real-estate buying binge,” already purchasing four homes with a price tag totaling upwards of $3 million. Notably, one of the homes was purchased at $1.4 million and located in a secluded area of Los Angeles, where the population is reportedly less than 2% black.

“A secluded mini-compound tucked into L.A.’s rustic and semi-remote Topanga Canyon was recently sold for a tad more than $1.4 million to a corporate entity that public records show is controlled by Patrisse Khan-Cullors, 37-year-old social justice visionary and co-founder of the galvanizing and, for some, controversial Black Lives Matter movement,” dirt.com reported.

The liberal activist was also eyeing a spot in an “ultra-exclusive” resort in the Bahamas, where musician Justin Timberlake and iconic golfer Tiger Woods both have homes.

“Patrisse Khan-Cullors, 37, also eyed property in the Bahamas at an ultra-exclusive resort where Justin Timberlake and Tiger Woods both have homes, The Post has learned. Luxury apartments and townhouses at the beachfront Albany resort outside Nassau are priced between $5 million and $20 million, according to a local agent,” The Post said in their report on the story.

“The self-described Marxist last month purchased a $1.4 million home on a secluded road a short drive from Malibu in Los Angeles, according to a report. The 2,370 square-foot property features “soaring ceilings, skylights and plenty of windows” with canyon views. The Topanga Canyon homestead, which includes two houses on a quarter acre, is just one of three homes Khan-Cullors owns in the Los Angeles area, public records show,” the report continued.

“She has my respect because she’s unapologetic in her approach. She’s telling you what she is. She’s a Marxist. So Marxists steal money from other people and they enrich themselves until the people that they stole from are poor. And so she has stolen money from other people on the pretext of a lie that is Black Lives Matter,” Owens said, referencing the fact that Khan-Cullors claims to be a hardcore Marxist.

“I mean, you have to kind of appreciate the honesty; she’s no hiding by any means, you know. … She’s a communist through and through, and she’s been unbelievably unapologetic in her approach,” Owens went on to add.