Canadian Researchers: Dodgeball Is “An Unethical Tool Of Oppression” and “Legalized Bullying” 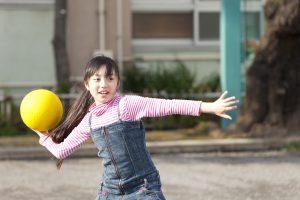 For all the complaints folks seem to have about homeschooling, here’s the only one that holds any water: “but when will they ever get to play dodgeball?”

If ever I were to consider sending my army of tiny humans off to public school (in ultra-lefty New York, mind you), it would be purely so they could experience, just as I had, the sheer glee of having a big, red Voit ball make that glorious ‘poink’ sound as it smacks you upside the head.

Dodgeball is a heck of a lot of fun, y’all, and it doesn’t deserve the rap it gets from some folks. I even remember having some kind-hearted gym teachers who made it a rule not to aim for other kids’ heads (but then you miss out on all the poinking).

Researchers in Canada, however, have ruled in staunch opposition against the game in an article that, I assure you, is not satire.

The games children play in schoolyards are famously horrible, if you stop and think about them.

Tag, for example, singles out one poor participant, often the slowest child, as the dehumanized “It,” who runs vainly in pursuit of the quicker ones. Capture the Flag is nakedly militaristic. British Bulldog has obvious jingoistic colonial themes. Red Ass, known in America as Butts Up, involves deliberate imposition of corporal punishment on losers.

There are no words to describe what he’s just said. Tag?! Tag is dehumanizing? What even is “Butts Up?” Even if Capture The Flag is “nakedly militaristic” (which it’s not, unless y’all are playing the game in minefields or something), how on earth is any of this actually harmful?

It’s not, but Brean continues, declaring dodgeball to be the mother of all child-oppressing schoolyard games:

But none rouse the passions of reform-minded educational progressives quite like dodgeball, the team sport in which players throw balls at each other, trying to hit their competitors and banish them to the sidelines of shame.

According to “educational progressives” like Brean, the scourge of dodgeball must be stamped out of every Canadian school in order to inch ever closer to utopian social justice.

“Dodgeball is not just unhelpful to the development of kind and gentle children who will become decent citizens of a liberal democracy. It is actively harmful to this process,” Brean notes, ascribing the statement to the “educational theorists” who believe the game is inherently “oppressive.”

“As we consider the potential of physical education to empower students by engaging them in critical and democratic practices, we conclude that the hidden curriculum offered by dodgeball is antithetical to this project, even when it reflects the choices of the strongest and most agile students,” the theorists claim.

Above all, dodgeball’s “hidden curriculum” teaches the “five faces of oppression,” Brean continues, as it focuses on the “marginalization, powerlessness, and helplessness of those perceived as weaker individuals through the exercise of violence and dominance by those who are considered more powerful.”

I’m guessing these are folks who got poinked a little bit too hard when they were kids.

To be fair, there’s little to no actual educational value in dodgeball, and kids would certainly learn more useful skills in team sports that require cooperation and develop social skills to achieve a goal.

But, I don’t think anyone has ever made the argument that dodgeball is meant to be educational. These kids are stuck sitting in desks for the majority of their day, cramming more useful information into their heads than they can probably handle. Let them take off their thinking caps for half an hour and just have fun.