How Can You Tell the Difference Between a Protest and a Temper Tantrum? 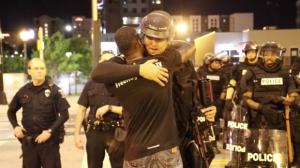 Shut up and believe what we tell you to believe. No, you shut up and quit being so stupid.

Those four lines pretty much sum up what’s going on in our nation right now. As reason flees and tempers flare, it seems safe to assume that all the foot stomping has caused more brain damage over the last week than the NFL has seen since the very first leatherhead took the his very first professional snap. Despite three major hurricanes; a loony-tunes fatboy with a bad attitude, nuclear weapons, and a serious death wish; peaceful Muslim extremists who want to love us all into submission; a Chinese military growing by leaps and bounds while our armed forces try to recover from the Obama years; and a Congress paralyzed by incompetency and cronyism, we’re obsessed with a bunch of black millionaires who say America is all about holding black people down.

According to the “news” media’s narrative, Poor Colin – a black professional football player whose soul ached at the injustice heaped upon his people by a racist nation – bravely sat on the sidelines in protest while the national anthem played, compelled by his conscience to take righteous action against an unrighteous people. Refusing to stand for the song those people claim as their national anthem was not only appropriate, the media gushed, it was commendable. Then, proving his charges of inherent, institutionalized racism, Poor Colin was dismissed from the NFL. Fired for his protest! Poor, poor Colin.

Other players joined Poor Colin, taking a knee to fight racism. Coaches, support staff, and owners quickly jumped in, doing their part to help. Those knee-shaped imprints left in football stadiums across the country, the media told us, were powerful weapons in the war to change the hearts and minds of everyday Americans. Tolerant, loving fans embraced the movement. Racist, hate-filled Trump supporters claimed it was disrespectful to the flag. They further showed their racism by insisting that politics be left out of the entertainment they paid to enjoy.

In reality, a mediocre NFL quarterback let his social-justice-warrior girlfriend talk him into creating a media frenzy around his team by deliberately pissing off millions of Americans. Then, he opted out of his contract, looking for a better offer, and found himself without a team. What his BLM girlfriend didn’t explain to Poor Colin was that you can be a mediocre player and keep your job in the NFL if you put your head down and don’t cause trouble. Or, you can turn your workplace into a three-ring circus if you consistently win football games and put fans in the seats. A half-assed quarterback whose personal agenda creates enough chaos to threaten a team’s integrity, however, is going to spend Sunday afternoons watching instant replays from his couch.

And what has Poor Colin accomplished by sacrificing his career? In their demand for empathy, the NFL protestors have said, “We don’t care what you think. We’re going to protest until we get what we want, and you can’t do anything about it.” Consequently, racial tensions are higher now than most of us have ever seen. Instead of creating more understanding and trust between police officers and citizens, protestors have spit in the faces of those who protect us both at home and abroad, creating even more problems.

The left has criticized those offended by the disrespect that passes for protesting. “Y’all wanted non-violent protests,” they say, “and you’re still complaining.” Calls for a boycott of the NFL have been used as proof that white, conservative America will never accept black Americans as real citizens. While the obvious answer is to point out people like Ben Carson, Clarence Thomas, Condoleezza Rice, Herman Cain, Allen West, Walter E. Williams, Thomas Sowell, and – whoopsie – Barrack Obama, simple, obvious answers have accomplished little in the childish rants that pass for our national conversation.

So, how could Poor Colin and his supporters have appropriately addressed the problem they claim to care so deeply about? For starters, Poor Colin could have called on his fellow players to acknowledge that the relationship between America’s black youth and the police is both troubled and volatile, and instead of laying blame and demanding the “other side” change, he could have publicly recognized that black-on-black crime is epidemic, and needs to stop.

He could have donated something from his millions and challenged others to do the same to fund programs aimed at teaching young black men how to avoid confrontations with the police altogether, and how to conduct themselves when confronted by law enforcement officers. He could have called for matching those donations with money to properly train officers in under-funded and under-staffed police departments, especially those in urban areas. He could have spoken out against the killing of so many law enforcement officers over the last six years. (No, those deaths aren’t fake news or urban myth. The numbers are there; go find them.)

In short, Poor Colin could have recognized the problem, demanded that everyone involved own it, and encouraged all Americans to help find a solution. Instead, he pulled on a pair of Saran Wrap panties and showed his hairy ass to the entire country and most of the world. Meanwhile, not a thing has changed for either poor, black young people or cops on the streets. Professional football, however, has likely been changed forever, and not for the better.