Call Out the Suffragettes! The Donald’s at It Again! 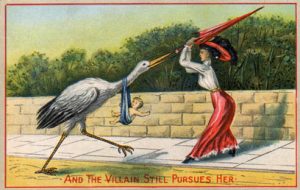 President Trump is at it again. Listening to the left and their lapdog “news” media, it sounds as if the orange-haired villain defaced the original copy of the Constitution yesterday when he scratched out the lines guaranteeing free birth control to all American women with his Presidential pen. In fact, based on the wailing and gnashing of teeth we’ve seen, it would be easy to believe the President stripped women of all rights guaranteed by the Constitution. The cruelty of the administration’s actions, we’re led to believe, is surpassed only by its rank misogyny.

The truth, of course, is a far cry from the drivel and dross the press is trying to convince us is real. In rolling back Obama’s contraceptive mandate, President Trump acknowledged the importance of protecting the rights of all Americans, not just those pursuing the leftist agenda. From their screeching protests, it appears the American left believes otherwise.

Originally issued in 2011, the contraception mandate required all employers offering health insurance to cover all forms of contraception including the morning after pill, which ends a pregnancy within hours of conception. The only exemptions allowed were for churches. Religious-affiliated groups, such as a charity or religious-based school, could use a third-party administrator or insurer to meet the requirement.

That meant the government forced employers like the Little Sisters of the Poor, a Roman Catholic organization serving the elderly in thirty different countries, to violate specific requirements of their religion. While not Catholic, the owners of Hobby Lobby voiced a strong religious objection to supplying pills designed to cause an abortion. They challenged the mandate in court, claiming it violated their religious liberties. They won, and in 2014 the exemption was extended to for-profit, closely held corporations with sincere religious objections.

On Friday, the Trump administration announced that exemption will now be available to “any non-profit group, non-publicly traded company, or higher education institution with religious or moral objections.” Also, the third-party option will potentially available to any group with sincere religious objections. It’s estimated that about 120,000 women – 1/100th of 1% of all American women – might be affected.

According to the customer service reps at my health insurance company, insurance companies aren’t actually required to cover anything at all, particularly medications. Drug cards, they insist, are simply evidence of corporate kindness and generosity. While that might be a slight exaggeration, it’s true that insurance companies have much leeway in deciding which medications they will and won’t pay for.

Speaking of sex, I know as an adult male that I have to take certain important steps to avoid the unwanted consequences of having too much fun. The permanent, more expensive option is, of course, a vasectomy. Yes, my insurance company will probably pay whatever the minimum amount is they’re required to cover, but only after I’ve met my deductible, handled my co-pay, and signed an agreement to give the doctor any difference between what I’m charged and what my insurer decides to pay.

My other option is a quick trip to the family planning section of CVS or Walgreens. In addition to being a lot cheaper with no permanent side effects, this choice also provides protection against ugly diseases in the event of promiscuity. Of course, taking the time to go make a purchase can be kind of a pain. It can also be pretty embarrassing for a young or otherwise squeamish man. But, grown-ups – even young ones – understand the risks and take precautions. They don’t stand around waiting for someone to cover the cost.

By forcing employers to pay for contraception – including abortion – President Obama showed his disdain not only for the religious liberties guaranteed by the Constitution but for those who hold sincere religious beliefs contrary to the leftist agenda. On the campaign trail, candidate Trump acknowledged the difficulties Christian business owners faced under the Obama regime and pledged that, if elected, he would provide relief. Yesterday, President Trump made good on that promise.

But… I believe I’ve had some kind of epiphany while writing this article. Stay with me here, and I’ll explain. Those on the left are the ones demanding free birth control, and big leftists make little leftists. Giving them what they want just might help curb leftism in America.

Uh oh. Could The Donald have blown it here?