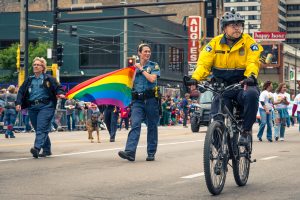 Looks like there’s only so much room under the inclusivity tent when it comes to what you do for a living.

The organizers of an LGBT Pride festival in Sacramento, California have reportedly disinvited LGBT cops from marching in their parade unless they wear something other than their police uniform.

It's an event that's supposed to be all about inclusion, but for LGBTQ police officers in the city who've braved discrimination to be out in life and at work, they say their own community is excluding them from participating in PRIDE in uniform.​ https://t.co/Nc21hWO0fx

According to the Sacramento LGBT Community Center, the event’s main organizer, keeping gay police officers out of their triggery uniforms is just one of eight initiatives to “improve” the event.

“We have consistently heard from many queer and transgender people of color in our community that they can be triggered by the police uniform at Pride, which for them represent personally traumatic experiences and systemic injustices,” an announcement on their website says. “Creating a space where all queer and trans community members feel safe is critically important.”

To be completely fair, these folks at least have an explanation for their blatant discrimination against their own people on the basis of occupation: police uniforms will remind the event participants of an event gay rights history that most of them probably weren’t alive for.

“The foundation of Pride 50 years ago was the original Stonewall Riots which was an uprising against police brutality,” said David Heitstuman, executive director of the Sacramento LGBT Community Center, in an interview with the local FOX television affiliate.

The riots Heitstuman refers to took place at the Stonewall Inn, a gay bar located in New York City’s Greenwich Village. Back then, police occasionally raided popular gay haunts to arrest gay and transgender people under since-repealed moral laws. In the early hours of June 28, 1969, however, several of the bar’s staff and patrons fought back, resulting in a violent five-day clash with police.

“Not everyone feels safe in the presence of uniforms,” Heitstuman added.

Because a bunch of anti-police millennials somehow have PTSD from a historical event they weren’t alive or present to witness. Sounds about right.

As FOX40 News reports, the decision came after hours of meetings with police:

For years uniformed gay, trans and cisgender Sacramento officers have staffed outreach booths and marched in PRIDE. Last year was the first time they were asked not to participate, as the community grappled with the police killing of Stephon Clark. Understanding the kind of pain members of the public were feeling, they did not.

Officers say re-entering PRIDE was to be one more way they’re working to rebuild trust in the community. For them, wearing their academy polos or regular t-shirts wouldn’t help the public see them as regular people and get more comfortable approaching them. Officers have been warned by event organizers that even in their polos, protests of their presence are likely.

To assure participants that they can march half-naked and covered in neon pink glitter in peace, the Sacto LGBT Community Center said that uniformed cops will be on hand to oversee street closures and patrol the event “in compliance with the City’s Special Events Ordinance safety requirements.”

“We will have private security and identifiable community safety monitors throughout the March and Festival as an alternative first response to any conflict or need for assistance by guests,” organizers also said. “We will continue to seek opportunities to reduce the need for police and increase safety at the events.”

The Sacramento Police Department released a statement expressing their disappointment in this brazen discrimination: “We support our LGBTQ officers who proudly serve our community on a daily basis… They have worked hard to earn these uniforms and are proud to wear them.”

Since Black Lives Matter-inspired protesters like this believe that policing is an inherently racist institution that props up white supremacy and that wicked institution of oppressive capitalism, this really shouldn’t be a surprise.

Back in 2017, Pride marchers in New York carried a pink banner the width of 5thAvenue that read, “There are no queer-friendly cops.”

No Justice No Pride, an anti-cop group steadily gaining traction, seeks “to end the LGBT movement’s complicity with systems of oppression,” including police departments, of course. They’ve released plenty of friendly fire at multiple Pride parades on the East Coast.

And, then, there are brilliant specimens of the attitude that will surely be the welcome demise of the LGBTQWERTYUIOP+ movement like this one:

I'm sorry but there's certain things kids shouldn't see at pride. When impressionable lgbtq kids see gay bankers and cops flaunting their lifestyles at the parade, they get the wrong idea that queer liberation is possible within capitalism

Apparently, you can be as gay as the day is long, but if you have a job the LGBTQIAWXYZ+ mafia doesn’t like, you’re out.