California Isn’t Texas: In Texas you’d get your teeth knocked out for this. 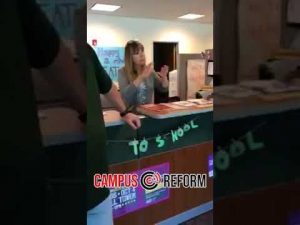 Another opponent of free speech in California! Shocker. A woman stole a student’s MAGA hat this week at the University of California, Riverside.

The woman then ran to the administrative building with the man’s had and demanded that HE be punished. Makes you want to just pinch a fool doesn’t it?

Trump-supporting student at the University of California, Riverside had his MAGA hat stolen by a peer who demanded that administrators refuse to allow him to continue to wear it.

A video of the incident obtained by Campus Reform shows an enraged female student taking the hat to the school’s Student Life Department as Matthew Vitale fruitlessly attempts to explain to the young woman that the hat is his property.

“So this guy thought it would be a good idea to go into a conference wearing this f***ing hat,” the student who stole the hat states. “Look at the kind of sh*t he’s wearing, You know what this represents? This represents genocide—genocide of a bunch of people.”