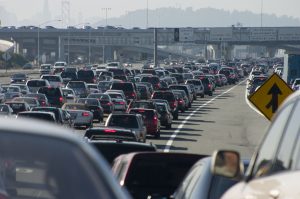 Every time I think the Golden State geniuses have surely run out of things to hyper-regulate or ban, they always have something up their sleeve.

While no one can deny with a straight face that California’s major metros are the air pollution hubs of the Western Hemisphere, these people can’t seriously expect to just ban combustion engines and get away with it, can they?

Sure they can. Just hold their kale smoothie.

Based on prepared remarks acquired by Bloomberg News, Mary Nichols, chair of the California Air Resources Board, was expected to suggest a ban on gas-fueled cars as one of many ways the state can crack down on smog at an air-quality workshop in San Diego.

According to USA Today, the top regulator was set to say the following during her speech:

“That might mean, for example, tougher requirements for low-carbon fuels, looking at tighter health-protective regulations on California refineries, doubling down on our enforcement efforts on mobile and stationary sources — and might lead to an outright ban on internal-combustion engines.”

That sounds like an unholy fiscal and logistical nightmare, but okay, then.

Although she stopped short of directly referencing a combustion engine ban, Nichols concluded the conference stating that “fees, taxes and bans on certain types of vehicles” would likely be required if the state couldn’t figure out how to make their air breathable again any other way, but that “these are things that most of us don’t think is the right way to go.”

For starters, why should the whole everloving state be subject to a ban on gas-fueled cars when its biggest cities are the problem? For example, why should Monterey, home to some of the cleanest air in the Union, be subject to the same ban as Los Angeles?

For another, how are California’s working-class families going to be expected to pay for a hilariously overpriced hybrid or electric car?

The majority of these poor folks are stuck in a stalemate where they can’t afford the state’s insane cost of living but can’t afford to move out of state either. People like Nichols honestly expect them to find room in the budget for a bajillion-dollar-a-month car payment for a Tesla?

I sure don’t have the answers for Californian cities’ pollution problem, but I know a statewide ban ain’t one of them.