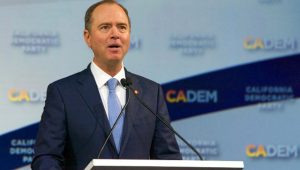 California Democrat Rep. Adam “Shifty” Schiff recently stated that the Republican Party will not have a future if it is comprised of the “anti-truth cult” for former President Donald Trump.

MSNBC host Andrea Mitchell stated during an MSNBC interview, “We’re hearing something very different from another Republican, Republican Senator Mike Rounds, saying that his party should tell the truth about the 2020 election after he was attacked by former President Trump in recent days.”

Mitchell was making a reference to Sen. Mike Rounds, who stated that the former president and the GOP need to move on from the 2020 presidential election and just accept defeat.

Schiff was happy to hear those words and applauded them, which basically tells you all you need to know.

“Well, he’s absolutely right. The truth matters, integrity matters. If the Republican Party is going to have any future it has to get back to being a party of ideas and ideology and not this anti-truth cult of the former president,” Schiff stated during the interview.

Folks on the left are continuing to use a lot of inflammatory language when they chat about the riot that took place at the Capitol building in January 2021.

Vice President Kamala Harris marked the one-year anniversary of the incident by claiming what happened that day was comparable to the attacks on Pearl Harbor and 9/11, which is the very height of insanity.

During a speech calling from the Capitol on Thursday, Harris went on to claim that “Certain dates echo throughout history, including dates that instantly remind all who have lived through them where they were, and what they were doing when our democracy came under assault.”

For those who might not be familiar with history, somewhere around 2,400 Americans died during the attack at Pearl Harbor back in 1941.

It’s also reported that 2,996 people were killed during the terrorist attacks on September 11, 2001.

Doesn’t seem like either of these events are in any way even remotely like the Capitol riots last year.

Here’s a transcript of her comments via the Conservative Brief:

Fellow Americans, good morning. Certain dates echo throughout history, including dates that instantly remind all who have lived through them where they were and what they were doing when our democracy came under assault. Dates that occupy not only a place on our calendars but a place in our collective memory. December 7th, 1941. September 11th, 2001.

And January 6th, 2021. On that day, I was not only vice president-elect, I was also a United States senator. And I was here at the Capitol that morning at a classified hearing with fellow members of the Senate Intelligence Committee. Hours later, the gates of the Capitol were breached. I had left, but my thoughts immediately turned not only to my colleagues but to my staff, who had been forced to seek refuge in our office, converting filing cabinets into barricades.

What the extremists who roamed these halls targeted was not only the lives of elected leaders. What they sought to degrade and destroy was not only a building, hallowed as it is.

What they were assaulting were the institutions, the values, the ideals, that generations of Americans have marched, picketed, and shed blood to establish and defend. On January 6th, we all saw what our nation would look like if the forces who seek to dismantle our democracy are successful: the lawlessness, the violence, the chaos.

What was at stake then and now is the right to have our future decided the way the Constitution prescribes it, by we, the people, all the people. We cannot let our future be decided by those bent on silencing our voices, overturning our votes, and peddling lies and misinformation; by some radical faction that may be newly resurgent, but whose roots run old and deep.

When I meet with young people, they often ask about the state of our democracy, about January 6th, and what I tell them is January 6th reflects the dual nature of democracy, its fragility, and its strength.

These folks are totally insane. What other way can you describe this kind of thinking? It’s the very definition of melodrama. They are hyping up this riot as a means of creating fear and division. They want conservatives to look like domestic terrorists so they can win elections.