California: Banning Mini Bottles Of Soap Will, Like, Totally Save The World And Stuff 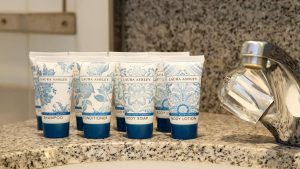 Not to be outdone by New York’s recent ban of plastic grocery bags (and, of course, a tax on their paper replacements), California is preparing to, like, totally save the world by banning those adorable mini bottles of soap and shampoo you get at hotels.

For the state’s stalwart population of hippies, foregoing soap might not be a big deal, but I’m guessing most California hotel guests aren’t visiting the state for hackeysack and drum circles.

“In California alone hotels use hundreds of millions of single use plastic bottles every year,” said Assembly Member Ash Kalra of San Jose.

Kalra is co-authoring a bill that would ban the tiny plastic bottles at almost 10,000 hotels state wide.

“We can get those bottles out of the waste stream, but also cut the production of them, which is also harmful to the environment,” he said.

Oh, California. How adorable. Nevermind the fact that overregulation and consumer product bans only further cripple your economy, do you realize—or care—that single-use plastic bans accomplish next to nothing in the way of saving the environment? Even these hippies get it.

Let’s also ignore the fact that the hilariously vast majority of plastic that winds up in the ocean finds its way there by way of rivers in the Asian continent, mostly in third world countries and, of course, China.

While it might feel nice for California to be the environment’s white knight, that ain’t quite how bans like this pan out.

Now, typically the unspoken rule of the internet is never to read the comments on controversial articles or social media posts, but in the case of CBS’ coverage of the ban, I made an exception. Big surprise: folks in CA aren’t happy about yet another ban. In fact, I was pleasantly surprised by the locals there offering their valuable insight and predicting unintended outcomes for this latest plastic ban. Here are my favorites:

John Nada/American in CA tells us, “I was at a trendy hotel a couple years ago that went to pump dispensers. someone peed in the dispensers and everyone freaked out. Sometimes there is a reason things like single serving bottles exist.”
That’s it. I am never using a pump dispenser of any kind while out and about ever again.
“…While California’s at it, might as well save water by not washing hotel sheets and towels,” commented Ed Christie. “Let’s see how that works for ya!”
Don’t give them any ideas, Ed.
A bright lad named Mark Reynolds pointed out the stunning hypocrisy of California’s liberal voice in foreign policy which, he argues, is far more environmentally dangerous than plastic soap bottles: “1) Plastic bags 2) Plastic Straws 3) Take out Styrofoam now courtesy bottles are in crosshairs? Meanwhile shorelines from Imperial Beach to Coronado are shuttered as millions of gallons of sewage flow daily down the Tijuana River into San Diego County. Busy shuttering small businesses lawmakers skirt real issues like the State Department failing to enforce a treaty that obligates Mexico to treat its sewage before sending it to the U.S. just nuts!”
And, my favorite of them all, a comment from Andrew Ziolo, explaining that, thanks to the synergistic effect it will have with the current overregulation of air travel, the real burden of this ridiculous ban will fall on those traveling to the state: “TSA prohibits traveling with large bottles creating dependance on hotels for small bottles. Now regulation is killing the small hotel bottles making the process of cleaning up on a trip a hassle. I suppose we will have to buy large bottles and toss out them out before the returning flight. More cost more waste.”
Y’all, we know this latest ban—and all the bans before it—isn’t about saving the world. As good as the brave legislators of California want to feel about making a scratch in the 1% or so of plastic litter the United States contributes, the real motive is clear: control. Either these folks are passing bans left and right because they are genuinely ignorant of the ineffectiveness and harm they carry, or it’s simply a matter of growing government power one plastic bottle at a time.
How noble of them.