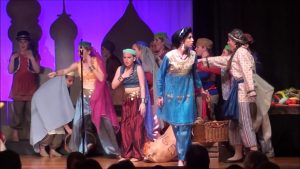 Welcome to America in 2018. Everything is stupid and no one is allowed to have any fun.

And God forbid a school put on a hokey adaptation of a 90’s Disney movie.

Now, I’m going to go out on a limb here and risk being very offensive.

So, you know, trigger warning or whatever.

Arabs and Muslims (yes, conservatives know there’s a difference) flock to the US for a number of different reasons, the vast majority of which include the fact that American is a heck of a lot better than Arab-majority nations.

In most nations in the Middle East, if you put on a play about Christmas or brought a drag queen as a special guest for story time to your kindergartener’s class, someone would end up losing their head.

But here in America, instead of enjoy the yes, occasionally offensive freedom you just had to come all this way to enjoy, you just want to make sure we get a taste of that Sharia political correctness too, is that it?

A Catonsville, Maryland, elementary school cancelled their plans to produce a rendition of Disney’s “Aladdin” because of a complaint that it supported negative stereotypes of Arabic culture.

Westowne Elementary School drama club in Baltimore County was scheduled to perform “Aladdin Jr.” — which is an adaptation of Disney’s 1992 film “Aladdin” — in February of next year, according to WBAL TV 11.

However, those plans were derailed after parent complaints of negative stereotyping.

“In the play, Arabs are described as barbaric — those are the exact words that are used. And the actual play was very controversial apparently in the early ’90s,” said parent Danette Zaghari-Mask, who said her son was upset by it.

Even though auditions had already been held last month, Zaghari-Mask’s son decided to drop out of the play.

Zaghari-Mask, an attorney with the Council on American-Islamic Relations, said she felt, “It was worth expressing his experience to the school, and were just so relieved that the school is considerate of diversity.”

Her comments caused the school to cancel the play in favor of a less controversial production.

CAIR, if you’re not aware, is a powerful Islamic interest group with substantial ties to the Muslim Brotherhood. They’re also quite cozy with Linda Sarsour, the faux feminist who thinks that life for women is just peachy in Saudi Arabia–where it’s essentially illegal to be a Christian and women have to have male guardians to open a bank account, get a job, travel, or apply for a driver’s license.

It’s fair to say that kids should not see the ethnic group they are a part of belittled and mocked in their school play, sure. I haven’t seen the play so I don’t know how offensive it really was.

I just think we need to put this in the larger context of what, exactly, CAIR really cares about.