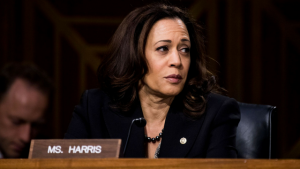 I really don’t want to just bash liberals all day. I’m sure there are plenty of left-leaning people out there who are intelligent, informed, educated, and think through their opinions.

It’s just really hard to believe this is true when so much of the Democratic party platform is based on contradictions, cognitive dissonance, and flat-out denial of reality.

Boys can be girls. Women are exactly like men. The adult children of immigrants deserve amnesty, but unborn children deserve death. Enforcing the border of a sovereign nation is mean. And the latest from CA Senator Kamala Harris…it’s wrong for a government agency to enforce the law.

The government agency in question is the Department of Homeland Security, which separates adult illegal aliens from their children when caught entering the country…illegally.

Harris addressed her concern with DHS’ tendency to enforce the law while grilling Secretary of Homeland Security Kirstjen Nielsen on the policy of separating parents and children.

“I’m extremely concerned about the administration’s repeated attacks on some of the most vulnerable communities, and in particular, children and pregnant women as it relates to the world of DHS,” Harris said in her opening remarks during a hearing of the Senate Homeland Security and Governmental Affairs Committee Tuesday, Town Hall reports.

Right–Harris and Democrats also want the government to provide abortions for even underage illegal immigrants in the US, at taxpayer expense, of course.

Which we do, despite the Trump administration’s best efforts last year.

“Nielsen denied that she had been asked to separate illegal alien parents from their children as a method of deterrence,” Town Hall notes, adding that Nielsen explained:

“My decision has been that anyone who breaks the law will be prosecuted. If you’re a parent or you’re a single person or you happen to have a family, if you cross between the ports of entry, we will refer you for prosecution. You’ve broken U.S. law.”

She also explained to Harris that…as if this needed to be explained…when someone breaks the law in the US, they are pretty much always separated from their children if they are indeed detained for their crimes.

What does Harris expect, for a nation whose border states are rife with crime, human, drug, and weapons trafficking to just stop prosecuting people for crossing said border and let America just fade into nothingness?

Of course she does.