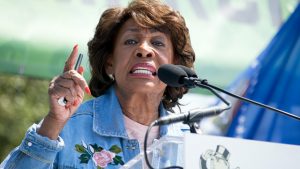 California Democratic Rep. Maxine Waters launched a super vicious verbal assault against members of her own party, going on to suggest they are racist after they refused to support radical leftist measures being pushed by the party.

Waters conducted an interview with MSNBC where she stated that Sens. Joe Manchin of West Virginia and Kyrsten Sinema of Arizona “don’t care” about black people and other minorities.

The comments made by Waters come after both Manchin and Sinema declared publicly that they would oppose efforts by the Democratic Party to get rid of the Senate filibuster so that the party could pass controversial voting bills.

“We have two Democrats, Manchin and Sinema, and they are holding up the Democratic agenda. They have decided that they are going to stick with support of the filibuster, and they don’t care whether or not they undermine the rights of minorities and blacks in this country,” she stated.

“It’s not what Democrats need to do. We’re doing everything that can be done,” she continued. “It’s what Republicans need to do. Why is it we don’t have one Republican, not one that will stand up for the voting rights for people in this country? And so I hear a lot of talk about our president. He’s fighting as hard as he can. I don’t know why people think that he can make Manchin and make Sinema do what is right.”

Democrats will easily gobble down their own if they dare to think for themselves and disobey groupthink, which is really what the party is after. You either adhere to the main message or watch your career go up in smoke.

No room for diversity of thought among the Democrats.