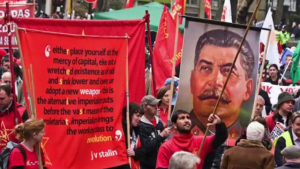 I just wish they’d do us all a favor and secede from the nation first.

The latest leftist antics coming out of the future People’s Republic of California is a bill proposed by a Sacramento Democrat to remove two Presidents’ birthdays from the calendar and replace them with the decidedly communist International Worker’s Day on May 1st.

The bill is sponsored by Assemblyman Miguel Santiago, would nix two holidays in February in which schools are closed, one day for George Washington and one day for Abraham Lincoln, and combine them in one day, making room in the calendar for another day off for the Soviet High Holiday.

OK, OK, so we joke about California going full-socialist, but fortunately, there are still many brave patriots holding their ground in the nation’s most populous state, and some even in the state legislature.

Santiago’s bill was read and rejected three times, according to The Daily Caller, and although he persists, the pushback is real.

“I’m aghast that a bill like this would be able to get through committee,” California Republican Assemblyman Matthew Harper reportedly said to the Assembly. “Are we in competition to be the laughing stock of the United States?”

“Are we going that far to the left?” he continued. “This is ridiculous; this is insane; this is un-American. And for folks who think that the U.S. won the Cold War with the Soviet Union, this makes it sound like we’re going in the other direction — that indeed California is kowtowing to the Soviet domination of the Cold War.”

With all the insane bills being proposed in California lately, from banning Bibles to punishing incorrect gender use to jail time for giving someone a plastic straw when they didn’t ask for it, it’s good to know that there are still politicians in this once-great state who are willing to stand their ground and take back some freedom for the comrades…I mean, citizens of California.