BuzzFeed to Lay of 15% of Employees After Botched “Bombshell” Story 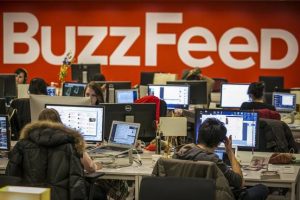 You may have blinked and missed it last week, but just before the initiation of CovingtonGate, BuzzFeed dropped a “bombshell” story claiming that Trump told Michael Cohen to lie to Congress about a mythical deal to build a Trump Tower Moscow.

The media absolutely flipped out for about 12 hours, thrilled that they may have truly come across evidence for a crime they’ve been desperate to prove for two years now.

Until Mueller dropped his own bombshell on them.

“BuzzFeed’s description of specific statements to the Special Counsel’s Office, and characterization of documents and testimony obtained by this office, regarding Michael Cohen’s Congressional testimony are not accurate,” said Peter Carr, a spokesman for Mueller’s office, in a statement.

Now, in the wake of this hugely embarrassing fiasco, in which BuzzFeed reporters swore up and down their story was legit just before being eclipsed by the media feeding frenzy over the Covington boys, BuzzFeed is laying off a substantial portion of their employees.

BuzzFeed is planning to lay off about 15% of its workforce, according to people familiar with the situation, as the company seeks to reorient itself in a shifting digital-media landscape.

The cuts could affect around 250 jobs, the people said. The firm, among the most high-profile digital-native publishers, also is looking to realign its resources to invest more in promising areas of the business like content licensing and e-commerce, one of the people said.

Maybe they should stick to cat gifs?