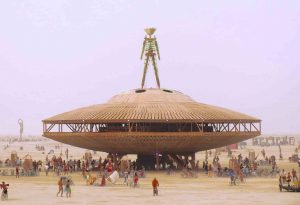 Once, a lifetime ago, this author attended the Burning Man festival.

The theme of the festival that year was “The Green Man,” but I couldn’t get past the irony that the cost of the festival for its thousands of attendants was pretty, um, whatever the opposite of green is.

If you’ve never heard of Burning Man, it is an annual “art” festival held yearly in the Nevada desert where thousands of fans of trance music and hallucinogenic drugs get together to make an incredibly expensive tent city and ultimately yes, burn a giant man at the end of the week.

To get out there and stay for a week in “Black Rock City” as it is called, one must drive their fossil-fuel-powered vehicle up to the desert in Nevada, equipped with plastic water bottles, good packed in plastic, several gallons of gas to fuel generators, use the many toxic port-a-potties provided by the festival, equip oneself with lithium-powered headlamps, rig your bike with questionably environmentally friendly LED lights, restock ones cooler several times throughout the week with ice that is most certainly not frozen by eco-friendly fairy dust, and all the while to enjoy a host of giant “art installations” that are doused in gasoline and literally set on fire at the end of the week.

So in other words, people spend collectively millions on wasteful, eco-unfriendly products, burn likely millions of gallons of gas, and dance like crazed pagans around giant bonfires of carbon emissions. And the year I attended, they were calling this “green.”

What’s also pretty laughable is organizers of the event have, for years, boasted that they take great lengths to ensure the festival leaves no impact on the delicate desert ecosystem, which any idiot would recognize is pretty questionable considering there’s little chance that five people camped out in the desert using port-a-potties, gas-powered generators, and burning a bunch of crap are going to leave zero impact, let alone thousands. On drugs.

Well, over a decade later and apparently I’m not the only one who noticed the festival is likely leaving a pretty big carbon footprint.

Career “Burners” or Burning Man attendees are raging over a Bureau of Land Management environmental impact report that accuses Burning Man of being a major environmental nuisance, and requests the weeklong festival in the Nevada desert take major measures to control trash, drug use, and crowds before expanding to accommodate more attendees.

The report, released late last week, is more than 400 pages long and comes in response to a request from festival organizers to grow the event to 100,000 attendees by 2022.

In it, BLM accuses Burning Man of becoming lax in enforcing certain rules during the festival, and demands that Burning Man hire a security force to check vehicles entering and exiting the temporary “Black Rock City” where the festival is held for weapons, controlled substances, and other terror threats. It also demands that the “free spirits” of Burning Man pay for maintenance to a county road only they use, and that they bring in dumpsters so that attendees can dispose of trash in an environmentally safe way.

The report also says Burning Man will need to put a temporary barrier around the festival city to prevent objects from blowing off into the desert.

Burning Man oganizers and attendees are absolutely incensed at the thought of the Bureau of Land Management daring to question their “stellar” record of leaving the Black Rock Desert completely untouched. In a series of posts on websites like YourEDM and BoingBoing, attendees complained that BLM was being utterly unfair in cracking down on the week-long festival that prides itself on a “Leave No Trace” policy.

They also do not understand why they need to pay for road maintenance, terrorism control, and environmental impact abatement when Nevada state and county taxpayers aleady supply plenty of funds for playa protection and upkeep.

Well, and there you have it, friends. Why should festival-goers, who pay hundreds of dollars just to get into the festival, be stuck with the cost of…the festival?

Leave it to the taxpayers. Duh.