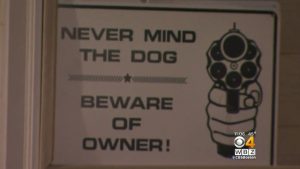 How about try this: Don’t be a criminal. And if that’s the career path you choose, then know that it’s probably not going to end well for you.

Burglars aren’t exactly known to be the sharpest tools in the shed. After all, if they were smart, they’d apply that intelligence to getting a real job or starting a business instead of stealing someone else’s hard earned money and property.

However, some are a whole lot dumber than others. Like this burglar in Massachusetts that broke into an armed police officer’s home. The real kicker that proves this guy wasn’t operating on all cylinders is that the cop had a warning sign posted on the house.

Well this man definitely regretted his decision because he ended up catching a bullet for it.

THERE WAS A SIGN ON THE FORMER OFFICER’S HOUSE THAT SAID “NEVER MIND THE DOG, BEWARE OF OWNER!” BUT THAT DIDN’T STOP THE ALLEGED BURGLAR.

WORCESTER POLICE SAID THE HOMEOWNER NOTICED A “SUSPICIOUS MAN DRESSED IN ALL BLACK” CHECKING CAR DOORS ON HIS STREET AT ABOUT 12:45 A.M. ON APRIL 29, WBZ-TV REPORTED.

The 56-year-old legal gun owner heard the prowler outside, grabbed his gun, and went to confront the man. He found him hanging out in his side yard.

POLICE SAID THE HOMEOWNER ASKED 29-YEAR-OLD ZACKERY BAILEY WHAT HE WAS DOING IN HIS YARD.

“THE HOMEOWNER ATTEMPTED TO ESCORT THE MALE OFF OF HIS PROPERTY,” POLICE SAID.

Neighbors then said they heard the male suspect threaten to shoot the retired officer and reach for his waistband which is when he fired several rounds at the suspect.

The epitome of stupid on display. Perhaps he figured the sign was a farce since he was, indeed, in Massachusetts with its strict gun laws.

He was hit and fled from the scene. He later called police and reported himself shot.

Bailey has not yet been charged as the investigation is still going on.

This, ladies and gentlemen, is why the Second Amendment exists. Our founding fathers were smart cookies who understood that mankind is corrupted by sin and as such, those who are innocent and righteous need to have the means available to protect themselves and their property from both criminals and from tyrants.

Here’s a clear cut case of a good guy with a gun stopping a bad guy, protecting his life and property from potential danger.

This is the kind of person gun control advocates would end up stripping of their right to bear arms. Just imagine what might have happened had the man not had his gun?