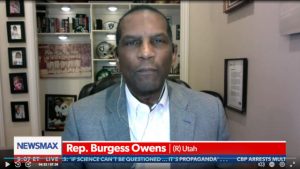 Utah Republican Congressman Burgess Owens is very optimistic about the chances the GOP has when it comes to taking back the House and Senate in the 2022 midterm election.

Making an appearance on “Cortes & Pellegrino,” Owens was asked whether he believed that Rep. Kevin McCarthy would end up being speaker of the House. His response included a prediction that stated, that “we’re going to get back the House. We’ll get back the Senate.”

Owens followed up by saying that “my hopes are and my prayer is the American people will come out in such a way that we can overcome any details that Biden puts out. So we’re going to be a country going back to [winning] our freedom back.”

For the upcoming 2022 Senate race, there are six toss-up seats. The seats of the states include Arizona, Nevada, Wisconsin, Pennsylvania, North Carolina, and Georgia. If Republicans win four seats, they will be at a 51 seat majority.

For the House, the Democrats currently hold a majority of 221 seats to 213 seats. And according to 270 to Win, “the biennial election for representatives from all 435 Congressional Districts will take place on November 8, 2022. Census-driven redistricting will change the boundaries of almost all of these districts. This is not limited to states gaining or losing seats.”

It’s absolutely critical for conservatives to win back the House and the Senate if we want to prevent the Biden administration from further damaging our great nation.

However, the work is just beginning.

If we want to see our values restored and liberty last, we need to begin working on renewing the culture with conservative principles. We need to engage the arts, create alternatives to the woke junk people are sick and tired of.