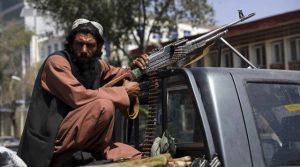 According to Rep. Tim Burchett, it’s a “bunch of bull” that the Taliban want to have good relations with America, when what these terrorists are really after is “checkbook diplomacy” from President Joe Biden.

These comments are in response to new reports which have demonstrated that the Taliban is essentially holding Americans and Afghan allies hostage by refusing to allow them to fly out of the airport. Six planes have been blocked from doing so thus far.

“They want to hold those people hostage,” the Tennessee Republican stated during a recent episode of the Newsmax program, “Wake Up America.” “It’s just a continuation of bad policy. They know what’s going to happen under Biden. They know eventually, he’ll capitulate. He’ll break out this country’s checkbook once again and we’ll be sending pallets of cash to our enemies, and then unfortunately what’ll end up happening is more Americans will lose their lives.”

Over the weekend, Rep. Michael McCaul, a Texas Republican, conducted an interview where he revealed that the Taliban is blocking airplanes that are carrying Americans from being able to leave from the Mazar-i-Sharif International Airport located in the northern part of Afghanistan.

The Associated Press, however, reported Tuesday that there are conflicting reports and that an Afghan official at the airport said that the passengers were Afghans and many didn’t have passports or visas and were not able to leave the country, according to NPR. He also said they left the airport.

“It’s chaos, is what it is,” said the congressman during his appearance on Newsmax. “We have mixed reports. We have reports from people being tortured and abused and possibly murdered, so we really don’t know what’s going on in there, and that makes it even worse.”

He also said that Biden is “trying to move on and just forget this and acting like, you know what, like what Hillary Clinton said, what does it matter. That’s basically what you’re getting, and you’re getting our national media just echoing that very point.”

He pointed out that the okay to pull troops out of the country should not have been given until all of the civilians were taken out.

“They got it backward,” Burchett went on to say. “[Biden] is the guy that didn’t want to get [Osama] bin Laden and they had him. Even [Barack] Obama wanted to get Osama bin Laden. Biden is inept and he needs to step down.”

While he said that Biden would need to step down, he said that he’s also worried that the “devil we don’t know” referring to Vice President Kamala Harris, if Biden resigns, might be “worse.”

“This country is in a bad state of affairs,” he said. “I say this all the time. But I tell folks, we need to start praying for our country because it is so far past diplomatic relations, and Americans are going to lose their lives.”

When asked whether or not this whole debacle would stick to Biden, Burchett replied that since Americans seem to have short attention spans, he’s not so sure.

“In America, we want our pizzas in 30 minutes,” said Burchett, going on to say he’s concerned that if gas prices end up dropping, “that’s what everybody’s going to focus on.”