Bulverism  – The “BS” Strategy of the Left! 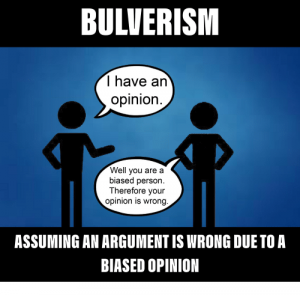 I know, what the heck is “bulverism”?  It’s the logical fallacy of assuming without discussion that a person is wrong and then distracting his or her attention from this (the only real issue) by explaining how that person became so silly, usually associating it to a psychological condition. It is essentially dodging your opponent’s argument by treating them like a psychiatry patient who needs your evaluation to explain why they came up with such a ridiculous argument in the first place.

The fallacy was coined by C.S. Lewis in his essay, First and Second things.

Lewis wrote: The modern method [of argumentation] is to assume without discussion that [your opponent] is wrong and then distract his attention from this (the only real issue) by busily explaining how he became so silly. In the course of the last fifteen years I have found this vice so common that I have had to invent a name for it. I call it Bulverism. Someday I am going to write the biography of its imaginary inventor, Ezekiel Bulver, whose destiny was determined at the age of five when he heard his mother say to his father — who had been maintaining that two sides of a triangle were together greater than the third — ‘Oh you say that because you are a man.’ ‘At that moment’, E. Bulver assures us, ‘there flashed across my opening mind the great truth that refutation is no necessary part of argument. Assume that your opponent is wrong, and then explain his error, and the world will be at your feet. Attempt to prove that he is wrong or (worse still) try to find out whether he is wrong or right, and the national dynamism of our age will thrust you to the wall.’ That is how Bulver became one of the makers of the Twentieth [and Twenty-First] Century. (C. S. Lewis, “Bulverism,” in God in the Dock, p. 273)

Bulverism is the primary strategy of all leftists today because of the historical evidence of their failed and flawed ideologies.

The late William F. Buckley said years ago: “Liberals claim to want to give a hearing to other views, but then are shocked and offended to discover that there are other views.” Such is the frightening world of the modern West: there is no longer difference of opinion, just one point of view that cannot be challenged.

The illiberal, illogical left wants journalists fired for not holding the “correct” positions on hot-button social issues. They complain of feeling unsafe and uncomfortable in class if their professors teach the wrong authors or use the wrong phrases. They charge all same-sex marriage opponents with bigotry, homophobia, and try to shut down their businesses. They claim that pro-life women aren’t really “women” at all, and can’t be trusted to vote the right way on “women’s issues” or anything else. Anyone that voices any opposing viewpoint concerning socialism, race relations, immigration, gender identity, same sex-marriage, etc. is labeled a fascist, racists, misogynistic, right-wing, hate-speech using, religious, fundamentalist terrorist.

Leftist dominated college campuses deem any non-leftist views to be punishable “hate speech.”  Those expressing conservative views are to be “counseled” and “re-educated.”

If someone does not believe your words utterly and without question, put on a facemask and bash them with bats and, more often than not, the authorities will stand by and do basically nothing.

Answer questions with riots and fake news. Forget dialogue and debates, ban all opposing viewpoints and burn the town to the ground.

Bulverism is nowhere more persistently and powerfully employed than in the “Never Trumpers”  attempts to oust the duly elected President of the United States. Donald Trump’s opponents couldn’t stop him in the election, they couldn’t stop his agenda in Congress and so far the hopes they’ve pinned on Mueller’s investigation haven’t borne fruit, wrote CNBC columnist Jake Novak.

“So enter phase four in the anti-Trump movement’s efforts to remove, delegitimize, or at least weaken the duly elected president of the United States: They’re making the case that he’s crazy,” Novak said.

In THE DANGEROUS CASE OF DONALD TRUMP, twenty-seven psychiatrists, psychologists, and other mental health experts argue that, in Mr. Trump’s case, their moral and civic “duty to warn” America supersedes professional neutrality. They then explore Trump’s symptoms and potentially relevant diagnoses to find a complex, if also dangerously mad, man.

As a proxy for the larger establishment media, the Media Research Center analyzed every moment of coverage of President Trump last year on the ABC, CBS and NBC evening newscasts, usually seen by more than 25 million people each night. The analysts catalogued 5,883 evaluative statements about the President or his administration from either reporters, anchors or non-partisan sources such as experts or voters. Only about 10 percent of those comments (617) were positive, compared with 5,266 (90%) which were negative — an unparalleled level of media hostility for a President in his first year in office.

More than two-fifths of evening news coverage of the Trump administration (43%, or 42 hours, 37 minutes) centered on various controversies associated with the President and his top aides. The Russia investigation was the networks’ favorite topic, with an astonishing 20 hours, 34 minutes of coverage, or more than one-fifth of all Trump coverage last year.

Discussion of all public policy issues combined amounted to 46 hours, 58 minutes of coverage, or roughly 47 percent of all Trump coverage.

In the contest for Most Offended News Network after President Trump reportedly referred to African nations as “s***hole” countries, CNN wins hands down. NewsBusters staff combed through CNN transcripts on Nexis for the S-hole word in the 24 hours of January 12 – the first full day after The Washington Post reported the controversy – and found CNN staffers and CNN guests uncorked the profanity 195 times in one day.

There is one true news story that is being broadcast in non-erasable form — the national media is forever exposed as biased partisans. Their hostility against the White House is now so obvious, nobody could possibly take them seriously if they ever again claim to be fair and non-partisan professionals.

Bulverism is the great “Bull###t” strategy of the left!