Broward County Sheriff’s Office Caught in YET ANOTHER Massive Screw Up. You Won’t Believe This One. 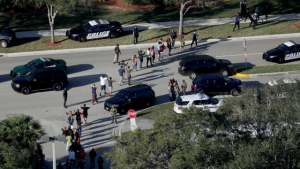 This is getting insane.

How incompetent can one Sheriff’s department be? At this point, it’s beginning to look like rather than fail to apprehend the Parkland shooter, Broward County Sheriff’s Office was practically his accomplice.

I’m not forming any conspiracy theories…yet. But it is mind-blowing how many ways the BSO absolutely failed to do a single darn thing to stop the unthinkably tragic shooting at Marjorie Stoneman Douglass High School on February 14th, 2018.

The Miami Herald has the story:

During the chaos of the Parkland school shooting, paramedics from Coral Springs-Parkland Fire Department were desperate to go inside the building where students were wounded and dying.

Michael McNally, deputy chief for Coral Springs fire-rescue, asked six times for permission to send in specialized teams of police officers and paramedics, according to an incident report he filed after the Feb. 14 Marjory Stoneman Douglas High School shooting that left 17 people dead.

But every time McNally asked to deploy the two Rescue Task Force teams — each made up of three paramedics and three to four law enforcement officers — the Broward Sheriff’s Office captain in charge of the scene, Jan Jordan, said no.

“The [BSO] incident commander advised me, ‘She would have to check,’ ” McNally wrote in the report released Thursday by Coral Springs. “After several minutes, I requested once again the need to deploy RTF elements into the scene to … initiate treatment as soon as possible. Once again, the incident commander expressed that she ‘would have to check before approving this request.’ ”

Even after the shooter had been arrested, the answer remained the same.

Now, to be fair, as the Miami Herald notes, it is unclear whether or not allowing paramedics into the building could have saved lives, and it is the job of law enforcement to secure an area before allowing first responders in.

The BSO was also relying on the school’s closed-circuit security footage and believed the shooter was in the building. They did not realize the video footage had a 20-minute delay.

This does not mean, however, that the failure to allow the paramedics into the building wasn’t a serious oversight.

“In his report,” the Miami Herald says, “McNally acknowledged that RTF teams may not have helped in the end — but he said Jordan couldn’t have realized that when she repeatedly denied his requests.”

“Later, it was determined that the RTF element may not have aided in any additional care to patients,” McNally wrote. “However, this information was not known at the time of the requests.”

What on earth is going on here??