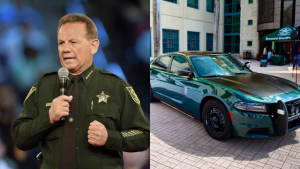 What in the actual blankety-blank is wrong with this guy?

Broward County Sheriff, Scott Israel, has been under fire for months now for the complete and utter failure of his office to address the very legitimate threat that the young man who would go on to kill 17 people at Marjorie Stoneman Douglas High School posed.

There was not one single instance of corruption and incompetence, but seemingly countless instances.

The evidence keeps mounting up against him and his office for artificially reducing the crime rate, ignoring calls about the shooter, and working with Broward County Public Schools to avoid prosecuting minors in the Obama-era PROMISE program, an incredibly negligent agenda that it’s safe to say could very well have directly prevented the Parkland shooter from being classified as a prohibited possessor when he was known to have committed a felony offense with a firearm.

Now, you’d think a man who found himself in the eye of the storm that is the raging gun control debate in our nation would try to keep a low profile, especially after receiving a vote of no confidence from his deputies’ union.

In what can only be described as a record-breaking display of lack of self-awareness, Sheriff Israel took to Twitter Sunday to brag about his fancy new car.

Our new #dodge #charger. Do you like the paint job? pic.twitter.com/l6EfKxuaru

The reactions say everything that needs to be said about this stunning and tasteless display, beginning with Dana Loesch, the NRA spokeswoman who Sheriff Israel effectively blamed for the shooting when he himself bears exponentially more responsibility than any NRA member in the history of the organization:

You ignored 45 calls to your office and worked with Runcie to prevent a criminal from establishing a record that would have barred him from buying a gun — for which you publicly blamed me. You’re a cowardly clown. https://t.co/SpOGoedOeA

Kyle Kashuv, the pro-2A survivor of Parkland who has used his time in the spotlight to rally young people to fight for their rights and address the real issues behind our nation’s rampant gun violence, also chimed in:

No, I'd prefer you do your job and not let kids die. Maybe spend the money on… training? Just a thought. https://t.co/8isBulzzlf

Then came the brutal, brutal puns:

Your officers do a lot of dodging but very little charging. https://t.co/SFuK2AoSD3

Just gonna go ahead and assume this car stalls out just when you need it most https://t.co/kqkNejQJlv

Harsh, but far beyond well-deserved. This guy is unbelievable.