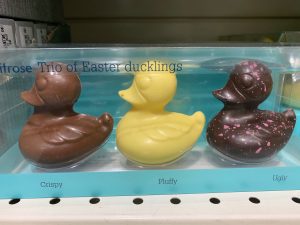 The left’s crusade to root out all forms of intolerance and bigotry, real or imagined, is plumbing newer and lower depths of asininity every single day. Their next target? Easter candy.

That’s right, y’all. It’s 2019, and even the sweets you consume in remembrance of our Lord’s glorious resurrection represent white supremacist microaggression. So says this super-woke lady in the UK, at least:

The chocolate ducklings were offered at Waitrose, a Britain-based grocery store, where Aliberti says she overheard other shoppers expressing their shock at the word choice used for the dark chocolate duck.

Side note: mixing dark brown with pink splatter would probably fit anyone with a design background’s definition of “ugly”, but that’s beside the point.

Of course, Aliberti fails to utter a single word about the fact that the milk chocolate duck was simply named “Crispy”. Anything racist about that? Or does “Fluffy,” the name for the yellow-tinged white chocolate duck hint at white supremacy? Is “fluffy” an alt-right code word or something we don’t know about?

Apparently, Hans Christian Andersen needs to have his classic fairy tales, like The Ugly Duckling, made into Disney movies for anyone to remember them these days.

Thankfully, a handful of other Twitter users were there to lend Aliberti a hand:

Crispy duck (from the popular Asian dish), fluffy duck (because ducklings are often fluffy and yellow in colour), and ugly duckling (from the Hans Christian Andersen story, who ends up being the best duckling of them all).

I hope that's cleared things up. For duck's sake…

Although practically every single response and retweet expressed outrage at the insanity of being offended by chocolate and not the offensiveness of the chocolate itself, Waitrose was quick to pull and repackage the candies as quickly as possible.

“We are very sorry for any upset caused by the name of this product, it was absolutely not our intention to cause any offence,” Waitrose said in a statement published by CNN. “We removed the product from sale several weeks ago while we changed the labeling and our ducklings are now back on sale.”
Aliberti thanked Waitrose in a follow-up tweet, noting that the reference to “the 50s tale” of The Ugly Duckling (which Andersen wrote in 1844, actually) was “a tad outdated.” Satisfied that the darker chocolate duck had finally received justice and the anti-dark chocolate retailer had done sufficient penance, Aliberti can go back to scanning the grocery stores of the world for more subtle outbursts of microagression. Thank you for your service, Ms. Aliberti.