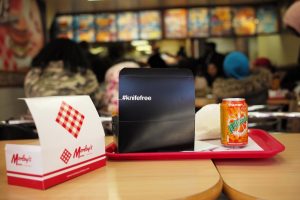 The Home Office, Britain’s bumbling government entity in charge of its police force, has hit a brand new low in its attempts to root out epidemic levels of knife crime: They’re printing anecdotes and warnings about stabby sticks on fried chicken boxes at fast food joints.

No, it’s not Babylon Bee, they seriously thought this was a good idea and went ahead with it.

I strongly suspect that the soft skull responsible for this latest idea is the same genius behind Britain’s knife trade-in program and knife surrender bins (read to find out how both of those worked—spoiler: they didn’t.)

“Special chicken boxes warning about the dangers of carrying a knife are to be distributed to takeaways across England and Wales by the government,” Sky News reports. “More than 320,000 of them — featuring the Home Office #knifefree campaign — will replace the standard packaging in 210 outlets.”

According to The Daily Wire, the boxes feature true stories of young Britons who either fell victim to knife crime or escaped it. The boxes will be distributed at chicken joints like Morley’s, Chicken Cottage, and Dixy Chicken, who may also feature screens displaying #Knifefree messages.

“We want to promote being knife free by using custom chicken boxes to deliver the message and start conversations amongst all of our customers,” Morley’s managing director Shan Selvendran said of the boxes.

Selvendran’s hopeless naivete was masterfully outdone by that of policing minister Kit Malthouse, who hopes that the boxes will shine a light on the “tragic consequences” of carrying a knife and debunk “the idea that it makes you safer”.

“The government is doing everything it can to tackle the senseless violence that is traumatizing communities and claiming too many young lives, including bolstering the police’s ranks with 20,000 new police officers on our streets,” said Malthouse.

“Everything it can.” Oh my goodness. Chicken boxes are part of “everything” the government can do to try to root out the inherent flaw of man that drives one to commit a crime in the first place. How hilariously futile.

Taking the story to social media, the Home Office had the sheer self-unawareness to tweet about the boxes:

We are rolling out our #KnifeFree chicken boxes in over 210 chicken shops in England and Wales, including Morley’s, Dixy Chicken and Chicken Cottage. They use real life stories to show people how they can go #KnifeFree. pic.twitter.com/vrG4WWa56v

Unsurprisingly, folks came out of the woodwork to mercilessly mock the Home Office for their unmitigated stupidity. Some government officials even took part in the tarring and feathering, but for reasons that honest-to-goodness did not occur to this writer: printing the messages on fried chicken boxes as opposed to, say, fish and chips baskets, is racist.

“Is this some kind of joke?! Why have you chosen chicken shops? What’s next, #KnifeFree watermelons?” MP David Lammy said on Twitter.

Racist motives can be argued elsewhere, this writer’s own understanding of the hearts and minds of British politicians is insufficient for that topic. Instead, let’s enjoy the People of Twitter™ pointing out the good ol’-fashioned idiocy, racially-motivated or not, of this campaign.

Oh, yes. This is because the kids stabbing each other and committing crimes are *squints* in gangs and are *squints harder* definitely black and therefore *gouges out eyes and holds to notes* eat fried chicken. Fuck me, what on earth are you morons thinking with this?

I once tried to use mayonnaise to get ketchup out a friend's carpet. These #KnifeFree chicken boxes are a much more stupid idea. I can now market Mayonn-eaze Carpet Stain Remover with pride.

I was going to commit knife crime until I read *squints* 'Sean's true story' on a takeaway chicken box.

Y’all, Britain is an ugly mirror for us to look into should we ever lose our Second Amendment rights. The 2020 Dem sideshow needs to stand up and take notice.

There’s only a generation or so that needs to elapse between unconstitutional firearm restriction and this nonsense:

These items were found during a #weaponSweep near #MackworthHouse #AugustasSt during #OpSceptre . Safely disposed and taken off the streets pic.twitter.com/53HdeqMKu1