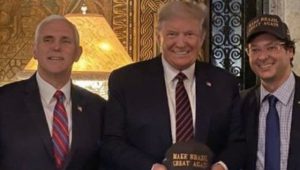 Fabio Wajngarten, who serves as the communication secretary for Bolsonaro, began to experience flu-like symptoms on Wednesday. He was subsequently tested for the illness and found out he was positive. Several of his traveling companions have also been quarantined after the positive test.

A regional development minister, Rogerio Marinho, noted that Bolsonaro’s scheduled visits throughout the country had been postponed as he waits to see if he is infected.

Bolsonaro and Wajngarten both visited Mar-a-Lago on Saturday to join Trump for dinner. Wajngarten was photographed standing just to the left of Trump and Vice President Mike Pence, wearing a “Make Brazil Great Again” hat following the dinner. Several of Trump’s other associates were present at the dinner.

The guy standing to Trump’s left just tested positive for coronavirus, according to Brazilian media. Fabio Wajngarten posted this photo, taken during meetings at Mar-a-Lago, five days ago. pic.twitter.com/qioU4qIlxl

Trump and Pence had both not been tested for coronavirus as of Monday evening. The two also had recent contact with several prominent Republicans who had been in contact with Alan Berger, a New Jersey doctor who had tested positive for coronavirus after attending the Conservative Political Action Committee.

Now, as important as it is to keep cool heads and not overreact to this illness, it’s also critical to take the proper precautions to ensure this virus doesn’t get spread to those with compromised immune systems. Which means Trump and Pence need to get tested and quarantined if necessary.

Hopefully, they don’t have this awful sickness, but it’s better to be safe than sorry.