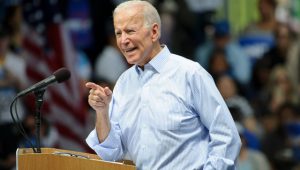 Only one-fifth of Americans who participated in a recent poll say they want to see President Joe Biden top the Democratic Party ticket in the 2024 presidential race. However, even fewer folks want to see Vice President Kamala Harris as the nominee.

The president was named by 22 percent of the participants in the survey from I&I/TIPP, with Harris netting 12 percent of 1,013 registered voters who were questioned in the poll, which was conducted online between Dec. 1-4 by TechnoMetrica Intelligence, according to reports from Tipp Insights.

So how did the other potential candidates fair in the poll? They didn’t get out of single digits. Ouch.

Here are some of the findings of the survey via Newsmax:

“Meanwhile, 6% said they preferred someone other than the people named on the list, and 31% said they are unsure of who they want, signaling that it may be too soon for them to have decided who they would want in 2024,” the report continued.

The poll has a margin of error of plus or minus 3.2 percentage points.

However, Democrats were also less than excited over Biden coming back for a second go, with 37 percent stating they wanted him to top the ticket, while 16 percent saying the want his vice president, Kamala Harris, to be the nominee.

Meanwhile, in other results:

The poll comes as Biden’s political support continues to fall. According to a RealClearPolitics average of polls, the president’s approval rating is at 42.35%, with his disapproval at 52.2%.