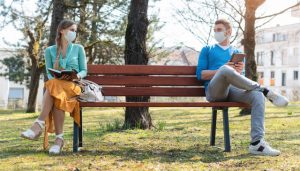 A brand new study that was just released by the Massachusetts Institute of Technology has revealed that social distancing inside at 60 feet is not any safer than at 6 feet, pointing out that exposure time is far more important while inside.

The researchers in this particular study say there is “little benefit” to the whole “6-foot rule,” especially while wearing masks indoors.

“The distancing isn’t helping you that much and it’s also giving you a false sense of security because you’re as safe at 6 feet as you are at 60 feet if you’re indoors,” MIT engineering professor and study author Martin Bazant explained. “Everyone in that space is at roughly the same risk, actually.”

Researchers calculated exposure risk to the virus based on factors such as amount of time spent inside, air filtration, and circulation. They also looked at factors such mask use, immunization, and respiratory activity like breathing, eating and speaking.

They study, which was published this week in the Proceedings of the National Academy of Science of the United States of America, found that the amount of time spent indoors with an infected person is more important than the distance from the infected person.

“It really has no physical basis because the air a person is breathing while wearing a mask tends to rise and comes down elsewhere in the room so you’re more exposed to the average background [air],” Bazant went on to say. “What our analysis continues to show is that many spaces that have been shut down in fact don’t need to be. Often times the space is large enough, the ventilation is good enough, the amount of time people spend together is such that those spaces can be safely operated even at full capacity and the scientific support for reduced capacity in those spaces is really not very good.”

Bazant said the 6-foot social distancing rules that have been implemented by many folks all across the globe are “just not reasonable.”

“This emphasis on distancing has been really misplaced from the very beginning. The CDC or WHO have never really provided justification for it,” Bazant explained.

In other words, almost every measure we’ve taken to slow the spread of COVID-19 hasn’t worked. So, if that’s the case, why are we all still doing them?