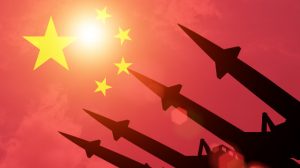 According to a new report from the Washington Examiner, U.S. military forces “do not know how to defend” against the new advanced missile systems currently in the possession of both China and Russia.

This information was brought forward by a senior U.S. diplomat.

This comes right after a stunning and very scary report concerning China testing a nuclear-capable hypersonic missile earlier this year was released to the public. However, it’s important to note that the Chinese government has been disputing the report ever since it came out, stating they were testing a spacecraft, not a missile.

“Hypersonic technology is something that we have been concerned about,” said Ambassador Robert Wood, who is the representative for the United States at the Conference on Disarmament held in Geneva. “We just don’t know how we can defend against that technology, neither does China, neither does Russia.”

That admission followed a report that China tested a hypersonic missile in August that orbited the globe but missed its target by more than 20 miles. Chinese officials deny conducting a weapons test, but Wood cited the development as a catalyst for a hypersonic arms buildup.

“We have seen China and Russia pursuing very actively the use, the militarization of this technology, so we are just having to respond in kind,” he went on to say.

Chiina continues to maintain that the alleged missile test was just a “spacecraft” that is designed to make round trips.

“This was a routine test of spacecraft to verify technology of spacecraft’s reusability. It is of great significance to reducing the cost of using spacecraft and providing a convenient and cheap way for mankind’s two-way transportation in the peaceful use of space,” Chinese Foreign Ministry spokesman Zhao Lijian went on to tell the press Monday. “Several companies around the world have conducted similar tests.”

Intercontinental ballistic missiles “share many similar technologies and processes inherent in a space launch program,” an overlap that U.S. officials and analysts have underscored in the context of Iran’s development of technology that could deliver a nuclear warhead.

“We have made clear our concerns about the military capabilities China continues to pursue, capabilities that only increase tensions in the region and beyond,” Pentagon spokesman John Kirby said in his response to the alleged missile test.

While the report suggests that China has developed missiles that can avoid U.S. missile defense systems, some analysts have argued that the latest innovation adds little to China’s ability to strike the U.S.

“China already has ~100 nuclear-armed ICBMs that can strike the U.S.,” Middlebury Institute’s Jeffrey Lewis wrote in a post published on Twitter. “A new system to evade our defenses is only threatening if we were planning all along to destroy/intercept China’s ICBMs in a crisis. Which we definitely weren’t.”

Wood, who is the arms control diplomat for the United States, seemed to imply that U.S. officials have tried to avoid spurring on a scramble for hypersonic missiles.

“We had held back from pursuing military applications for this technology,” he went on to say.