Brand New Poll Reveals What Democratic Voters Think Of ‘Camps’ For The Unvaccinated; This Is Terrifying 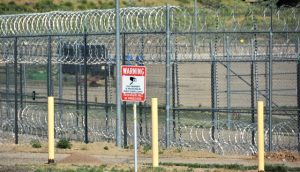 A shocking new poll has discovered that nearly half of all Democratic Party voters would support the idea of “camps” for fellow Americans who are not vaccinated.

According to a survey from Rasmussen, 45 percent of Democrats would endorse the idea of quarantine camps for folks who have not yet taken the COVID-19 vaccine.

What’s even more shocking is that 59 percent of Democratic voters stated they would support a government policy that forced their fellow citizens to stay confined in their homes at all times, except for emergencies, if they refuse to take the jab.

Here are additional takeaways from the poll:

– The survey found that 75% of likely Democratic voters – but only 21% of Republicans and 38% of unaffiliated voters – have a favorable opinion of Dr. Fauci. Among other findings of the survey:

– Fifty-eight percent (58%) of voters would oppose a proposal for federal or state governments to fine Americans who choose not to get a COVID-19 vaccine. However, 55% of Democratic voters would support such a proposal, compared to just 19% of Republicans and 25% of unaffiliated voters.

Fifty-nine percent (59%) of Democratic voters would favor a government policy requiring that citizens remain confined to their homes at all times, except for emergencies, if they refuse to get a COVID-19 vaccine. Such a proposal is opposed by 61% of all likely voters, including 79% of Republicans and 71% of unaffiliated voters.

– Nearly half (48%) of Democratic voters think federal and state governments should be able to fine or imprison individuals who publicly question the efficacy of the existing COVID-19 vaccines on social media, television, radio, or online or digital publications. Only 27% of all voters – including just 14% of Republicans and 18% of unaffiliated voters – favor criminal punishment of vaccine critics.

Forty-five percent (45%) of Democrats would favor governments requiring citizens to temporarily live in designated facilities or locations if they refuse to get a COVID-19 vaccine. Such a policy would be opposed by a strong majority (71%) of all voters, with 78% of Republicans and 64% of unaffiliated voters saying they would Strongly Oppose putting the unvaccinated in “designated facilities.”

– How far are Democrats willing to go in punishing the unvaccinated? Twenty-nine percent (29%) of Democratic voters would support temporarily removing parents’ custody of their children if parents refuse to take the COVID-19 vaccine. That’s much more than twice the level of support in the rest of the electorate – seven percent (7%) of Republicans and 11% of unaffiliated voters – for such a policy.

What an awful, awful time in our country’s history. When Americans would gladly sell out the freedom of their neighbors for the false illusion of safety and security, our nation is truly on the cusp of destruction.