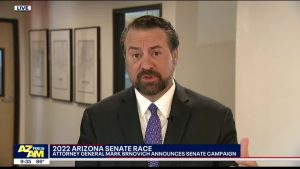 Arizona Attorney General Mark Brnovich has a very solid lead in the state’s Senate race, according to a brand new poll that was conducted by the supper PAC that is currently supporting his campaign.

Brnovich leads a crowded field with 41%, followed by Blake Masters, a top lieutenant to venture capitalist and Republican donor Peter Thiel, with 6%; businessman Jim Lamon with 5%, and former adjutant general of the Arizona National Guard Mick McGuire with 4%. The Arizona attorney general’s early advantage comes despite having been criticized by former President Donald Trump over his handling of Trump’s narrow loss to President Joe Biden in the state last November.

“Mark is the conservative fighter trusted by Arizona Republicans — and this survey proves it,” Scott Will, who currently serves as a senior adviser to Advancing Arizona Forward, the Brnovich super PAC, went on to say in a statement.

The poll, from Republican firm OnMessage Inc., was conducted Sept. 9–12 for Advancing Arizona Forward. The margin of error was 4.4 percentage points. The data was shared first with the Washington Examiner.

he survey had additional good news for Brnovich, per the polling memorandum prepared by OnMessage:

Republicans in the state are going toe-to-toe to earn the right to battle against Mark Kelly in the midterm elections next year. Kelly, a Democrat, won a special election last November with a total of 51.2 percent of the vote, which gave him the right to finish off the last two years of Sen. John McCain’s term after he lost his fight with cancer.

“As Kelly advanced to the Senate, Biden defeated Trump in Arizona by 10,457 votes. The former president has since claimed, without evidence, that the 2020 election was stolen and that he won Arizona,” the report said, adding, “Angry that Brnovich has not supported this specious claim, Trump has lashed out at him. ”