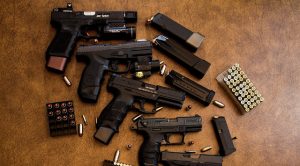 A man who had opted to hire a lobbyist help him get through all of the regulatory red tape to become the first and only licensed firearm dealer in the city of Washington, D.C. in almost a year is now watching his sales go through the roof.

Owner of S.C. Security Associates Shawn Poulin recently revealed that he had spent thousands of dollars on a lobbyist to help him get through all of the city’s extremely complicated and complex rules and regulations concerning the legal sale of guns.

“People told me, ‘Be prepared to deal with D.C. government, they’re as corrupt as anyone else,'” Poulin said. “I had to get a lobbyist and I was getting friction from the permit zoning guys.”

Mayor Muriel Bowser (D.) and the police department did not respond to questions about Poulin’s difficulty in getting approval for his store.

After pushing through the roadblocks and being approved to open in January, Poulin said his store has seen between 15 and 20 handgun transfers per day. The transfer process that saw some residents caught in a weeks-long wait when the Metropolitan Police Department ran it has been dramatically reduced. Poulin said the store has managed to help customers through the transfer and registration process, which at one point took months, in under 10 days.

“The reaction to the store seems to be very positive,” the gun shop owner said.

Poulin’s new venture pulls D.C. out of a legally perilous arrangement. Experts warned in June the police department acting as a federal firearms licensee (FFL) could create a conflict between the licensee’s requirement to keep records of all gun transfers and a federal law barring governments from keeping a database of those records. The bottleneck created by police processing of the transfers led Dick Heller, who previously defeated the city’s handgun ban at the Supreme Court, to threaten a new suit against the city.

Since D.C. has no gun stores and federal law requires handguns bought across state lines to be transferred through a licensed dealer in the buyer’s home state, the only way to legally purchase a handgun in the city is to buy one out of state and have it transferred in. Until March 2020, there was a single licensed dealer in the city, and he closed up shop just as coronavirus-related demand for handguns began to skyrocket. That left no legal options to buy a handgun in D.C. until the police department became licensed itself.

The police department has said that since the shop is now open, it will no longer be doing handgun transfers. “All new FFL business will go through private FFL dealers,” they said in a statement.

There has been a huge influx of first time buyers in the store since they opened. Many of these customers have not only come in to buy guns, but to also join the concealed carry permit classes.

This is a big win for the Second Amendment. May Shawn’s business continue to thrive in the middle of the swamp!