Brace Yourselves, California Is About To Pass A Whole Lotta Leftist Legislation 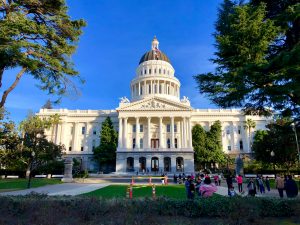 As a New Yorker, I have to express my sincere condolences and solidarity to conservatives in the People’s Republic of California. It can be so infuriating, frustrating, and disheartening to live in a beautiful state that you simultaneously love and want to escape before its takeover by insane leftists is finally complete.

For those who are hanging on and haven’t yet jumped from California’s ship of fools, it’s about to get a whole lot worse.

According to the Sacramento Bee, California takes its title as the “birthplace” of leftist laws seriously:

“Plastic straws? California made it harder to get them. Workers rights? The state passed a plan to increase the minimum wage to $15 by 2023. Tech regulations? The California Consumer Privacy Act that passed last year will restrict how much tech companies can use personal data by 2020. Immigration? Undocumented immigrants are protected in this “sanctuary state,” and the budget allocates millions for immigration-related services.”

It seems as though there is a new piece of unabashedly partisan legislation coming out of California every other day. Now, with single-party rule in the legislature and a governor eager to pass a litany of bills even Jerry Brown vetoed, the state is poised to catapult itself into new heights of leftist insanity.

After seeing the “unprecedented surplus” former Governor Brown generated from taxing the pants off of wealthier Californian households (figuratively, thank goodness), bloodthirsty Dems plan to impose heavier-than-ever taxes on corporations who do business within the state.

One tax proposal comes from state Sen. Nancy Skinner’s office. The Berkeley Democrat’s measure targets the top 0.2 percent of companies, and raises their corporate income taxes from 8.84 percent to 10.84 percent. Skinner said the proposal would increase state revenue by an estimated $2 billion and would help fund education.

Because penalizing successful businesses with an unrealistic tax burden is great for jobs and the state economy. Totally.

Even more protections from detention and deportation for illegal immigrants

Thanks to its law enforcement-obstructing 2017 “sanctuary state” law and virtual open-border policies, California is already the Big Rock Candy Mountain for those who choose to illegally bypass the country’s basic immigration requirements. Now, Assemblyman Rob Bonta, D-Alameda, wants to take the protection of “undocumented Californians” from, you know, the consequences of the laws they’ve broken, to the next level.

Of course, if the companies affected by the bill wish to keep doing business in California, Bonta says “they can simply decide not to be involved in the data brokering business or in the extreme vetting business or detention facility business.” In other words, no element of the immigration laws California refuses to enforce can be privatized or streamlined. Nope, not allowed.

Limiting the sale of rifles and shotguns to once-per-month

Well, the sale to law-abiding firearm owners, anyway. Illegal firearm sales by criminals and smugglers will continue on schedule.

Inching ever closer to legalizing prostitution

By way of incremental legislation that essentially decriminalizes “sex work”, California is plumbing the depths of wokeness by providing more protection from the law for prostitutes.

State Sen. Scott Wiener’s Senate Bill 233 would immunize prostitutes from arrest when they report violent crimes and prohibit the consideration of possession of condoms as criminal evidence against them.

“This is a profession that has existed since the beginning of time and we want to make sure that these men and women are safe and healthy,” Wiener told The Bee in a previous statement.

While some folks argue for the legalization of prostitution on the grounds of totally free trade and personal liberty, leave it to California to argue on the grounds of “justice” for folks in an illegal line of work.

Housing transgender inmates based on their “gender identity” just for funsies

In addition to SB 233, Wiener has also proffered legislation requiring state prisons and jails to house inmates based on their preferred gender identity rather than the one determined by their biology.

Ignoring the scads of anecdotal evidence that would suggest that placing biological male inmates in female prisons (and vice versa) is a rather risky venture, Wiener is pushing this bill purely for leftist brownie points.

“When we have the opportunity to push the progressive envelope, we should absolutely do that,” Wiener said. “Our transgender prisoner bill, housing people according to their gender identity, is pushing the envelope.”

Perhaps the most disgusting of the bills headed for Gov. Newsom’s desk is SB 24, a bill that forces University of California and California State University campus clinics to provide chemical abortions on demand.

Most student health clinics provide pregnancy testing and counseling, contraceptives, sexually transmitted infection services and routine women’s health tests, according to the bill analysis. But extending care to include abortions “ensures that students do not have to travel away from their school and work commitments to receive care.”

By classifying abortions as a legitimate healthcare need and considering healthcare to be a fundamental human right, California is removing yet another layer of protection for its unborn citizens.

The bill, put forth by State Sen. Connie Leyva, would go into effect by 2023.

Californians, how much longer can you hold on?