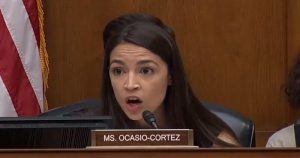 Progressive Reps. Alexandria Ocasio-Cortez and Rashida Tlaib are absolutely furious after Sen. Kyrsten Sinema, a Democrat from Arizona, came out and stated she does not support the $3.5 trillion spending plan that has been proposed by President Joe Biden and other Democrat lawmakers.

Sinema, along with Sen. Rob Portman, announced on Wednesday there was a bipartisan infrastructure deal that would only cost $1.3 trillion. She then went ahead and stated she did not support the larger spending package.

AOC took to Twitter to vent her feelings about the opposition from Sinema.

“Good luck tanking your own party’s investment on childcare, climate action, and infrastructure while presuming you’ll survive a 3 vote House margin especially after choosing to exclude members of color from negotiations and calling that a ‘bipartisan accomplishment,'” she wrote in her tweet.

Tlaib also took a shot at Sinema after tweeting a story about a 4-year-old girl who went missing after a flash flood in the state of Arizona.

“Sinema seems not to care that her own state is flooding, the west is burning, and infrastructure around the country is crumbling. Sinema is more interested in gaining GOP friends and blocking much needed resources, than fighting for her residents’ future,” she said.

Sinema had explained her opposition to the spending plan, saying that she has reviewed the blueprint provided by the Senate Budget Committee and has informed the upper chamber’s leadership and the White House that while she supports many of the goals that the proposal hopes to accomplish, such as improving job growth and the country’s economic competitiveness, she cannot support the total cost of the package.

“I have also made clear that while I will support beginning this process,” Sinema went on to say in a statement given to the Republic, “I do not support a bill that costs $3.5 trillion — and in the coming months, I will work in good faith to develop this legislation with my colleagues and the administration to strengthen Arizona’s economy and help Arizona’s everyday families get ahead.”