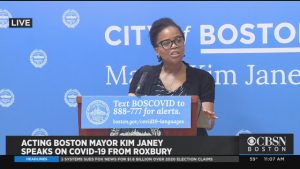 Acting Mayor of Boston, Kim Janey, believes that requiring the residents of the city to show proof they have been vaccinated against the coronavirus is a racist policy that is basically like a Jim Crow-style regulation that requires individuals to “show their papers.”

“We know that those types of things are difficult to enforce when it comes to vaccines,” Janey, who is a Democrat, stated on Tuesday after she was asked if she might create a mandate for “vaccine passports.”

“There’s a long history in this country of people needing to show their papers — whether we talking about this from the standpoint of, you know, as a way to, after — during slavery, post-slavery, as recent as, you know, what the immigrant population has to go through,” Janey went on to say. “We want to make sure that we are not doing anything that would further create a barrier for residents of Boston or disproportionately impact BIPOC [black, Indigenous and people of color] communities.”

“We’ve heard Trump with the birth certificate nonsense. Here, we want to make sure that we are not doing anything that would further create a barrier for residents of Boston or disproportionately impact BIPOC communities,” she stated.

“Instead, you want to lean in heavily with partnering with community organizations, making sure that everyone has access to the lifesaving vaccine. As it relates to people who want to encourage their workforce to get vaccinated. We certainly support that,” the Boston Mayor added.

The remarks that Janey made didn’t go over well with everyone.

“When we are combating a deadly virus and vaccine hesitancy, this kind of rhetoric is dangerous,” City Councilor Andrea Campbell said in a post on Twitter. “Showing proof of vaccination is not slavery or birtherism. We are too close to give ground to COVID. Science is science. It’s pretty simple — Vax up and mask up.”

“Anyone in a position of leadership should be using that position to build trust in vaccines,” City Councilor Michelle Wu said in a statement she recently released.

When we are combating a deadly virus & vaccine hesitancy, this kind of rhetoric is dangerous. Showing proof of vaccination is not slavery or birtherism. We are too close to give ground to COVID. Science is science. It's pretty simple – Vax up and mask up.https://t.co/twxS1PJqYY

“If we want to get serious about addressing vaccine hesitancy, slowing the spread of the Delta (and subsequent) variants, and keeping our families, friends, and neighbors safe, then we need to take bold and effective action,” he posted on Twitter. “We should be doing this in Boston.”

“Earlier today, I pointed out several hurdles facing communities of color with lower vaccination rates,” she said on the issue. “These hurdles should not be excuses, but we must consider our shared history as we work to ensure an equitable public health and economic recovery.”

While not agreeing with her reasoning per se, she’s right that this proof of vaccination garbage is bad news. It’s a communist course of action that would be used to further divide this country, which is the last thing it needs.