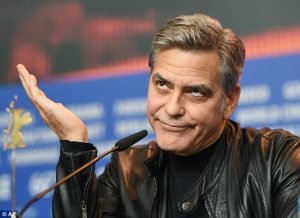 George Clooney has HAD IT!

George Clooney has HAD IT!

George Clooney is angry once again!  A few weeks ago he felt he needed to move back to Los Angeles because he feared for his family’s lives from Muslim refugees in England.  Seems that things aren’t all that peachy back in folds of Beverly Hills either.

Watch the short commentary from the Political Cowboy and see if you don’t agree with the problem at hand:

“George Clooney is mad folks and this time once again it’s at the paparazzi. Apparently Clooney has had issues with their tactics ever since the death of Lady Diana. Looks like they’ve gone too far this time however.

They jumped his fence, climbed his tree, and took pictures of their twin infants inside their home.

Clooney says his kids are off limits. How dare they breech his property and trespass illegally invading his privacy. Clooney says that the magazine the agency and the photographers will be prosecuted to the full extent of the law.

He says the safety of his children demands it.

Oh the hypocrisy of George Clooney and his fences. At least you have a fence George.  I figured that with your longtime stance on open borders and refugees and illegal immigration that you wouldn’t even have a fence.”