These Boots Are Made For Walking — But Not All Over Us! 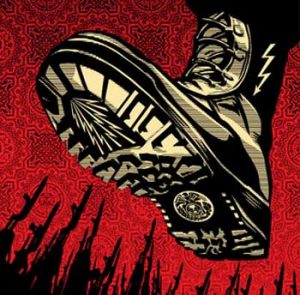 We freedom loving Americans must awaken to the tactics of those on the left who take any and every incident, at home or abroad, and immediately twist it into grist for their leftist’s propaganda mill from which they serve one “news hotcake” after another. This serves in nurturing more radical division, anger, hate, hurt and suspicion.

On Wednesday, three days after the tragic shooting in Las Vegas, “These Boots Are Made For Walkin’” singer Nancy Sinatra, daughter of Frank Sinatra, openly called for the roughly 5 million members of the National Rifle Association to be executed, thus proving why many Americans adamantly cling to their right to own firearms for self-defense.

Brittany M. Hughes, writing in an article for the Media Research Center said: “In a now-deleted tweet dripping with sanctimonious hypocrisy, the eldest daughter of O’ Blue Eyes blasted out on Twitter: “The murderous members of the NRA should face a firing squad.” Brittany goes on to write: “In case you’re a logical person and had trouble reading that correctly, I’ll translate: Nancy Sinatra wants to stop gun violence against innocent, law-abiding people by shooting innocent, law-abiding people.

“Ironically, Sinatra purports to be an activist with the anti-Trump “resistance,” a movement known for calling President Donald Trump a fascist and allegedly fighting “hate speech” against innocent people.

“But apparently, spewing hate speech and calling for the government-sanctioned execution of millions of law-abiding Americans is perfectly ok and not, in fact, fascist – if you’re a liberal.”

In another article for MRC, Brittany M. Hughes gives another example of how the left is hell-bent to tag Paddock as a “white male, alt-right, gun-owning and shooting, Christian! Hughes writes: “In a desperate attempt to link Las Vegas shooter Stephen Paddock to anything right-wing – even if doing so means completely ignoring basic facts and slandering an entire community of faith – Newsweek on Thursday published a shockingly defamatory article claiming Paddock was a “Christian by birth if not belief.”

“And so,” Nazaryan continued, “some on the far right have convinced themselves that Paddock could not be what he seems, what the authorities say he is. They say facts — alternative facts, perhaps — will inevitably reveal the truth, even as mainstream media outlets do everything they can to skewer that reality, so as not to offend the sensibilities of coastal elites.”

“The effort to link Paddock to Christianity by sheer virtue that he was a white male shows both a terrifyingly blatant sense of racism as well as a severe misunderstanding of the Christian faith.

“What’s more, imagine if this ridiculous accusation had been leveled against another faith, perhaps one that enjoys a more P.C.-protected status among our social justice elites. Imagine, for a moment, if Newsweek had published the following statement: “Having rejected Allah at 15 years old, Achmed was still a Muslim by birth if not belief. So of course he blew up the Walmart.”

“Of course, this would never make it past the assistant copy editor’s desk, much less to the printers. Such disdain and defamation is reserved for conservatives who believe in Jesus, who Newsweek feels perfectly comfortable throwing under the proverbial bus regardless of whether a cold-blooded killer shared an semblance of their beliefs.”

What should be the Christian response to the current situation in our country? The answer isn’t, “fighting fire with fire,” or by retaliating with a “tit for tat, butter for fat, you kill my dog and I’ll kill your cat” strategy.

Hilaire Belloc, the Anglo-French writer and historian, tells how once he and a friend were climbing by night in the Pyrenean Mountains. Suddenly a terrific storm and hurricane burst upon them. “This,” exclaimed his friend in awe, “feels like the end of the world!” “Not so,” replied Belloc, who had been there before, “this is how dawn comes in the Pyrenees.”

As the swirling winds of moral and intellectual darkness seem to engulf us as a nation, it’s causing many to say, “This feels like the end of the world!”  But this is the way dawn comes in God’s world!  Amidst the seeming darkness of our times, if you are looking for light ‑ Look at the S‑O‑N! The gospel day has dawned, the SON has risen, and His light is inextinguishable.

What laid the groundwork for Western Civilization?  What gave birth to science and technology, medicine, the arts, constitutionalism, the jury system, free enterprise, literacy, the high status of women, the care of children ‑‑ the answer is the transforming power of the gospel of Jesus Christ.

“Do not say of any man that he cannot be saved. Do not say of any district (or nation) that it is too sunken to be redeemed. Believe in Christ crucified, and preach boldly in His name, and you shall see great things and gladsome things. Do not doubt the ultimate triumph of Christianity. The cross must conquer; it must blossom with a crown commensurate with the person of the Crucified, and the bitterness of His agony. His reward shall parallel His sorrows. (Charles H, Spurgeon).

“Be ready! Let the truth be like a belt around your waist, and let God’s justice protect you like armor. Your desire to tell the good news about peace should be like shoes on your feet. Let your faith be like a shield, and you will be able to stop all the flaming arrows of the evil one.” (Ephesians  6:14-16)