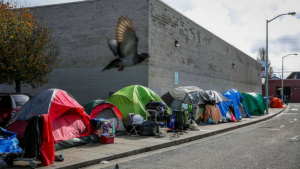 It probably will come as no surprise to you to learn that liberal policies make liberal cities crappy places to live. High crime, high taxes, high rent, and ridiculously overpriced coffee can quickly eclipse the thrill and excitement of the Big Apple or the Golden Gate.

So it’s understandable that people who work hard to make an honest buck only to watch that buck get cut in half by progressive tax policies would consider finding a place to live and work that didn’t take so very much of their hard-earned pay.

Americans are migrating from blue states in droves, opting instead for red states that understand how economics work and draft their tax policies accordingly.

Kristin Tate recently penned an op-ed for The Hill on the phenomenon she is dubbing “The Great American Exodus” in which upper-middle-class urbanites, stifled by high taxes and poor regulation, are opting instead for the heartland.

“New York, Los Angeles, Chicago — the places where power and capital have traditionally congregated — have become so over-regulated, so overpriced and mismanaged, and so morally bankrupt and soft on crime that people are leaving in droves,” she explains.

New York has experienced a dramatic exodus of residents, over one million since 2010 to be exact, Tate explains. And the city’s notoriously high taxes, insane prices, deep-seated corruption, and high crime rates are a very good indicator as to why so many people would want to leave.

“With between up to 50 percent of their paycheck going to a combination of federal, local and city taxes, not including other consumer taxes baked into every aspect of their consumer practices, residents don’t even have the comfort of knowing that their tax expenditures are going to the improvement of their lives in the city. New York infamously misuses the hard-earned tax revenues of its citizens in ways that scarcely benefit them,” she explains.

The People’s Republic of California, easily the most far-left state in the nation that is currently trying to ban the sale of Bibles and mandates LGBTQ education in schools on top of preposterous tax rates and self-destructively bad policies on immigration and crime prevention, is also seeing residents jump ship and opt for more reasonably-managed red states.

“In 2016 the Golden State lost almost 143,000 net residents to other states — that figure is an 11 percent increase from 2015,” Tate explains. “Between 2005 and 2015, Los Angeles and San Francisco alone lost 250,000 residents. The largest socioeconomic segment moving from California is the upper-middle class. The state is home to some of the most burdensome taxes and regulations in the nation. Meanwhile, its social engineering — from green energy to wealth redistribution — have made many working families poorer. As California begins its long decline, the influx outward is picking up in earnest.”

Soooooo….what all these facts and figures add up to is that liberal policies do not work. There’s a good chance a lot of the people who are fleeing the oppressive policies of blue states and cities are Democrats who are totally down with the cause, they just know how to use a calculator and want something more for their families than seeing their income get washed down the drain in their roach-infested $2,000-a-month apartments.

This might seem like a grand affirmation that fiscal conservatism is the winner, but it’s not. See, there’s no guarantee these people won’t move to red states and turn them purple, either. They just might start voting blue all over again!

So to you blue migrants out there: welcome! But remember why you left–we don’t take too kindly to your ruinous progressive policies in these parts!