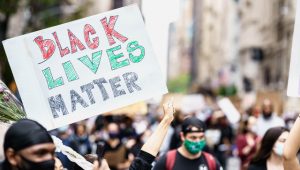 The national Black Lives Matter organization has sent out a number of legal threats against a rather prominent New York BLM activist for apparently using the group’s name and for calling for co-founder Patrisse Cullors to be investigated after spending millions of dollars on several new home purchases.

Yes, this is the part of the story where it turns out the self-declared “heroes” are actually hypocritical villains full of greed.

BLM Greater New York is unaffiliated with the national BLM group and is illegally operating under the BLM name, the foundation argued in its letters to Newsome.

Newsome “is not and has never been a part of the official Black Lives Matter organization, but continues to use BLM’s name even after sending him multiple cease and desist letters. Therefore, any mention of him as a leader is not factual,” and outside spokesman for the BLM Global Network Foundation said. “Only BLM chapters who adhere to BLM’s principles and code of ethics are permitted to use the BLM name.”

The national BLM group does not have legal rights over the Black Lives Matter name. The U.S. Patent and Trademark Office rejected six applications from the group to trademark the phrase.

Last weekend, Newsome called for some kind of audit for Cullors’ finance after the news broke that she spent a massive $3.2 million on four properties since 2016. One of those homes is near L.A. and was bought for $1.4 million. Another one is located near Atlanta and was purchased for $415,000.

It’s worth noting that these purchases came after Cullors published a memoir called, “When They Call You A Terrorist,” and after signing a “multi-platform” deal with Warner Brothers.

“BLM Global Network Foundation responded to allegations of impropriety surrounding Cullors’ lavish spending Tuesday, claiming that the allegations put Cullors and her family ‘in harm’s way’ and ‘continues a tradition of terror by white supremacists against Black activists,'” the DW report said.

So someone demands that a leader of this “movement” be looked into because of what looks like fishy spending habits that could involve money that was supposed to be part of a non-profit, and the group does everything in their power to shut that person down? Simply for trying to keep the group pure to its values?