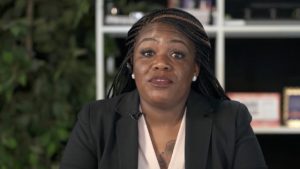 Cori Bush, a nurse and Black Lives Matter activist has made history in the state of Missouri by becoming the state’s first black congresswoman after winning big on Election Day.

Bush, who many say is destined to become the fifth member of the infamous “Squad,” earned a stunning 84 percent of the vote in Missouri’s 1st Congressional District.

“This is definitely a night to remember,” Bush said during her victory speech.

“This has been a historic day from the beginning to the end.”

Bush had the backing of the Justice Democrats — who helped propel Rep. Alexandria Ocasio-Cortez to her first upset victory over 10-term incumbent Joe Crowley.

Bush got involved with the Black Lives Matter movement in 2014, when Michael Brown, an unarmed black teenager, was shot and killed by a white police officer in Ferguson.

She joined the protests that erupted in the wake of the shooting and soon began leading the protests in her Missouri district.

Bush has remained very active in protest work ever since then, even playing a big part in organizing demonstrations for George Floyd and Breonna Taylor.

Folks, we need to be well aware of what BLM actually believes and how we can fight against their Marxist worldview while still managing to address the real issues that plague the black community.

For far too long conservatives have somewhat dropped the ball in reaching this particular demographic. And in our absence, Marxism in the form of Critical Race Theory is brainwashing people against the founding principles of America.

Here’s to hoping we all step up to the plate and help win this important demographic, for the betterment of our nation as a whole.