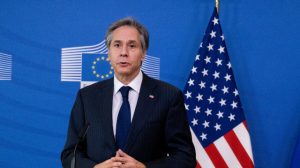 Secretary of State Antony Blinken has announced that the United States will be renewing aid for Palestinians, stating that the funding is an important humanitarian gesture that will help boost up peace talks, despite the fact the GOP sees this, rightfully, as financing terrorism.

Blinken added that the funding “aligns with the values and interests of our allies and partners,” but the announcement drew sharp criticism from the Israeli government as well as congressional Republicans. Opponents of the move, at home and abroad, suggested that renewed financing will exacerbate Palestinian terrorist threats to Israel.

“Resuming assistance to the West Bank and Gaza without concessions from the Palestinian Authority (PA) undermines U.S. interests,” Idaho Sen. James Risch and Texas Rep. Michael McCaul, the top Republicans on the congressional committees that oversee U.S. foreign policy, said Wednesday. “The PA is spending millions annually to compensate terrorists while the international community pays for the well-being of the Palestinian people.”

Israeli Ambassador to the U.S. Gilad Erdan protested, in particular, the plan to restore $150 million for the United Nations Relief and Works Agency for Palestine Refugees. An Israeli education watchdog reported in January that the agency’s educational curriculum promotes terrorism, noting that “UNRWA-created material is, in places, more extremist than PA material it complements.”

“Israel is strongly opposed to the anti-Israel and anti-Semitic activity happening in UNRWA’s facilities,” Erdan went on to say. “UNRWA is an organization that engages in political advocacy and enables incitement to violence, therefore it should not exist in its current form.”

Risch and McCaul alluded to that issue but directed most of their attention to the issue of funding for terrorism. Congress banned the provision funding that “directly benefits” the Palestinian Authority through the Taylor Force Act, a law adopted in light of the fact that PA officials provide a stipend to the families of terrorists who injure or kill Americans and Israelis, a so-called “pay-to-slay” program.

Well we all know how much the modern-day liberal absolutely despises the nation of Israel and anything that has to do with the Jewish nation, so it’s not surprising at all to see Blinken picking up the Obama era attitude toward Israel as colonialists and supporting Palestine.

One more thing to despise about this administration.