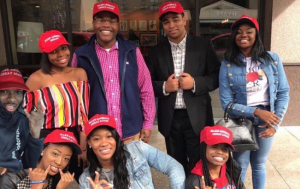 Now, here’s a case of police racism you most likely won’t be hearing Black Lives Matter complain about (whatever happened to them, anyway?)

A Missouri political outreach organization is reporting that they’ve been approached eight times by police officers trying to prevent them from canvassing…and every single incident has involved a black canvasser.

LifeSiteNews reports that the political action committee C3 PAC has been working hard in the battleground state of Missouri to rev up support for GOP Senate candidate confident state Attorney General Josh Hawley.

Police, apparently, haven’t been too keen on the young volunteers.

“We’ve had cops coming up to these kids, harassing them, telling them they cannot go door-to-door or they will be arrested,” Ryan Rhodes, leader of the C3 PAC, told to The Daily Caller News Foundation on Monday. “[The cops] know what [our canvassers] are doing. We’ve told them what they’re doing. The cops have been basically threatening these kids with arrest if they continue doing it.”

Of all the nearly 40 volunteers knocking on doors for the C3 PAC, every single one who has been approached by police has been black.

“We even have people canvassing in the same walk book, the same neighborhood, and they’ll stop the African-American and they will not stop the white,” said KaLeigh Long, on-the-ground C3 PAC leader in Missouri.

“They ended up arresting one of my guys. They said he had a warrant. Yet, all they did was pick him up on the white side of town and took him across the river into the black side of town and dropped him off. They never jailed him. They gave him a piece of paper with pencil written on it that said he had rolled through a stop sign so many years or months ago.”

Long has made an effort to ensure her black volunteers aren’t harassed so much, and one can’t help but notice that if these were Democrat volunteers, this would cause a national uproar.

“She’s asked her black canvassers to dress in more formal attire to reduce suspicion, and she is encouraging everyone to finish earlier in the day before it gets dark. Beyond the apparent racial components of the alleged incidents, there might be confusion over what the canvassers are doing,” LifeSiteNews explains. “Several times, she said police have told them they needed a permit to canvass.”

“No, I’m not voting for the Republican Party,” one canvasser said she was told. “Will you please get off my property, black n****r.”