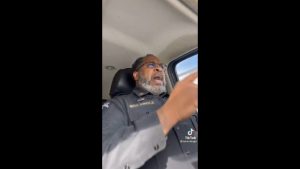 Leftists in the news media have been helping their progressive overlords inside and outside of the political realm to push a racially divisive narrative for years now, often times crafting a storyline that paints police officers are inherently racist and bad for society.

We’re at the point now where Black Lives Matter activists are calling for police departments to be abolished altogether. Yes, that’s an insane thing to call for. No, the left doesn’t care that it’s crazy. In fact, they want the senseless chaos such moves would cause because then they could justify taking away rights in the name of safety.

One thing many of us don’t stop to think about when hearing these narratives is how hard it’s hitting police officers and the emotional toll it’s taking on them.

Well, police officer Kevin Dingle posted a video on TikTok that gives a heartbreaking look on just how hard all of this has been on law enforcement professionals.

“I wake up every morning and kiss my family goodbye, knowing that there’s a possibility I won’t come home. I am tired of every time I wake up in the morning, there’s someone else polarizing the fact that maybe law enforcement is just not a good thing,” Dingle said, his passion for his profession clearly showing.

“All of us are not bad. I am not as they are. Most of us are not. There are bad people in every career. I’m so g–d— tired! Tired! TIRED!” He said, barely containing his emotions.

“I’m so tired. I give everything. I give EVERYTHING!”

Man, is that not just gut wrenching? This is what the radical left and their racist politics are doing to our local law enforcement officers, the very people tasked with protecting us and keeping us safe from criminals who want to do us harm.

Shame on us as a country for allowing the mainstream media and liberal politicians to turn us into hate mongers.

Source: Not The Bee