Black Man Puts Woman In Her Place For Racist Comments; Internet Obliterates Him 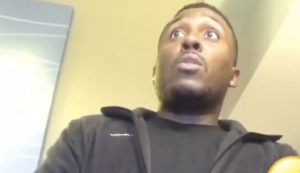 When it comes to dealing with social justice warriors, those obnoxious, virtue signaling never-do-wells who spend their time finding new things to be angry about online, you just can’t win.

It seems no matter what you do, even when you abide by their rules in one instance, the very next moment you could find yourself a target of theirs by daring to disagree with them on a different issue.

This is a lesson a gay black man learned the hard way after an incident at the front desk of a Holiday Inn Express in Austin, Texas. The man initially became an Internet hero for putting a woman in her place for calling him a “f***ing n*****” on the phone.

But then some folks dug up old tweets he posted stating he disagreed with transgenderism and the Internet turned him on with a quickness.

The man filmed himself telling the woman that he wouldn’t let her stay at the hotel and that “it’s above me now.” The woman apologizes for the slur she used and says she has had a hard day (a family member had recently died). The hotel clerk doesn’t give in, saying it was hurtful for him to hear what she said and directs her to the Best Western Hotel next door.

The man, who is black and gay, quickly became a meme Sunday night and into Monday. Buzzfeed News wrote about his video. Soon after, “Internet sleuths,” as the outlet called them, dug through the man’s old tweets (because that is the world we live in now) and found his past comments about transgender individuals.

Blue-check Twitter users amplified his past tweets, many of which simply state his opinion that he doesn’t “agree” with transgenderism and pointing out that men can’t get pregnant and women can’t “fertilize an egg.” Other tweets were responding to members of the trans community criticizing his tweets.

Liberal publication Buzzfeed soon joined in on the shaming party as well, proving that when it comes to these perpetually offended types, there’s nothing you can really do to keep them pleased.

Here’s what the man told Buzzfeed:

“They’re mad lol I said what I said. People are so sensitive. I’m gay and I KNOW people will not agree with me being gay. I just don’t and will never get trans. Period.”

This wasn’t enough to atone for his societal sins, however, so they kept on brow-beating the guy until he caved and said he would change his behavior.

There you have it, folks. A guy gets called a racial slur and stands up for himself, then mere moments later is labeled a hater simply because he had an unpopular opinion about transgenderism.

Welcome to the modern world.

Sorry it’s such a mess.